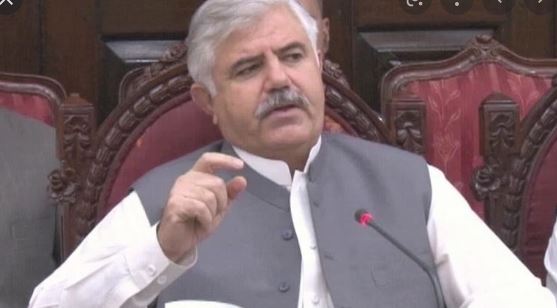 From Our Correspondent
PESHAWAR: Two separate delegations of elders from Chitral and Tehsil Khaal Dir Lower called on Chief Minister Khyber Pakhtunkhwa Mahmood Khan on Friday and discussed with him public issues of their respective areas and matters related to preparations for the upcoming local bodies elections. The delegation of Dir Lower was led by member National Assembly Sahibzada Sibghatullah whereas delegation of Chitral was led by the Special Assistant to Chief Minister for Minority Affairs Wazirzada. On this occasion, independent candidate for Tehsil Chairman from Tehsil Khaal, Shah Khalid announced to abdicate in favor of PTI candidate Akhoon Zada Ishfaq ur Raheem. Similarly, candidate of Pakistan Rah-e-Haq Party for Tehsil Chairman from Drosh Lower Chitral, Zia-ud-Din has announced to abdicate in favor of PTI candidate Haji Sultan and ANP candidate for Tehsil Chairman from Mastooj Upper Chitral, Faiz-ur-Rahman has announced to abdicate in favor of PTI candidate Sardar Hakeem. Talking the delegates, the chief minister said that PTI would contest the second phase of local bodies election with full preparations and would achieve great success with the support of public. He said that mistakes made in the first phase of the local bodies elections would not be repeated. He thanked the candidates who abdicated in favor of PTI candidates and said that their decision was absolutely right for the wellbeing of their areas. The chief minister said that his government was working for the uniform development of all the districts of province adding that during the last three and a half year uniform development activities have been carried out across the province including merged areas. He continued that Pakistan Tehreek-e-Insaaf has become the most popular political party of Pakistan and Imran Khan was the only leader who has raised voice for Islam and Khatme Nabuwat at all international forums adding that now world leaders were endorsing the stance of Imran Khan regarding Islamophobia. He said that some political elements were afraid of Imran Khan’s increasing popularity and propagating negatively against him. The chief minister said that those political opponents should now accept the reality that Imran Khan has become the popular leader not only in Pakistan but of the Islamic world as well. He urged upon party workers to maintain unity in their ranks adding that all party workers should stand with Imran Khan for making Pakistan a welfare State.