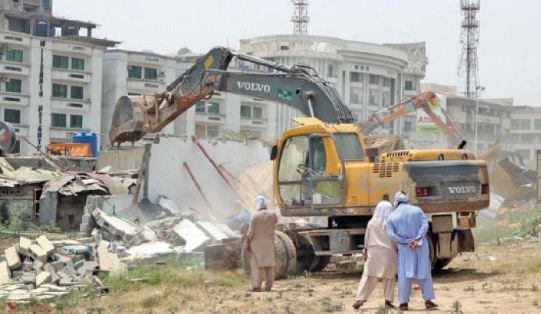 ISLAMABAD, SEPT 6 (DNA) – On the directions of the management of the Capital Development Authority, the Department of Enforcement, with the help of the district administration and Islamabad Police, carried out operations against encroachments and illegal constructions in various parts of Islamabad. In which illegal buildings, houses and other illegal structures were demolished
According to details, the operations were carried out in Sector F-13 of Islamabad, where an illegal plaza with 30 shops and a new illegal under-construction market were demolished with the help of heavy machinery
In addition, four kanals of government land in Sector F-13 was occupied by land mafia one gate was and a four wall was constructed illegally which was demolished with the help of heavy machinery
On this occasion, the CDA administration said that the protection of government lands is our top priority and no concessions will be made to the land mafia
It should be noted that for the last several months, the CDA has been conducting continuous operations against encroachments and illegal constructions in the Federal Capital, which has resulted in the retrieval of billions of rupees of government land.