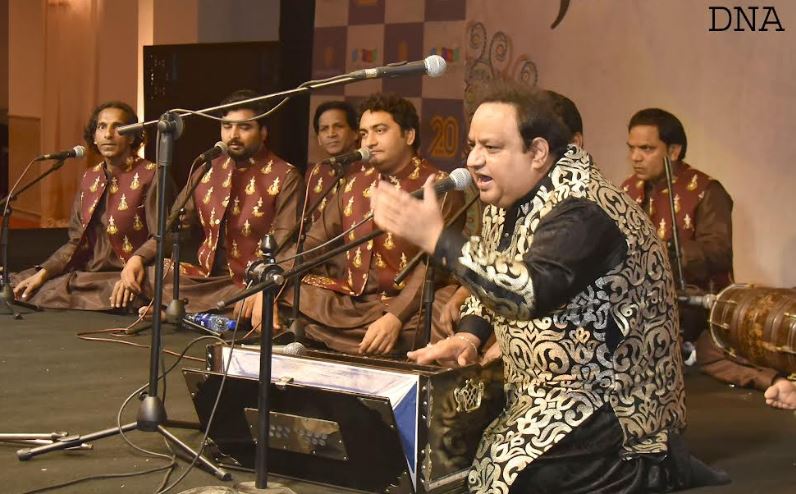 Imran Aziz Mian’s looks and his style are a mirror image of his father. He welcomed the guests at Jashn-e-Qawwali which is part of the celebrations of 20th anniversary of Islamabad Serena hotel

The Sheesh Mahal at Serena hotel Islamabad, set the mood of the night for the musical aficionados   who were in full attendance to savor the mystical rhythmic notes with Imran Aziz Mian on the invitation of Mr. Aziz Boolani, CEO Serena hotels

Going with the last name, Imran Aziz Mian is one of the nine sons of famous Aziz Mian qawwal who ruled over the hearts of millions of fans in South Asia for many years until his death in 2000. Aziz Mian who also holds the record of singing the longest commercially released qawwali for 150 minutes, was known as Shahenshah-e-Qawwali(King of qawwali). He attainted stardom over night when he performed in front of the Shah of Iran Reza Shah Pahlavi who was so awe-struck by his performance that he gave Aziz Mian a gold medal and his musical career, and tremendous boost.

The majestic stage at the center of the hall brought back the memories for many denizens of Islamabad who have been craving to quench their thirst for cultural rendezvous pre-covid period.

As Imran Aziz Mian and his party (Humnawa ) ascended the throne, the lights in the hall went dim and  the stage was  beautifully lit. It was first come first serve seating setup and spacious room for floor seating as well.  The younger crowd looked quite comfortable on the floor with cushions laid by their sides whereas the septuagenarians on the couches and quinquagenarians on chairs looked quite at home.

Imran Aziz Mian’s looks and his style are a mirror image of his father. He welcomed the guests at Jashn-e-Qawwali which is part of the celebrations of 20th anniversary of Islamabad Serena hotel under their cultural diplomacy program which initially started off with Mehfil-e- Mushaira a few months backs.

As the scion of the King of Qawwali started his rendition, the powerful and raspy voice brought back memories of his late father for many in attendance. Nabi nabiya Nabi nabi, Aadmi hay Benazir, Allah he janey kaun basher hai were the  hit numbers he sang one after another thus setting  the tone for the night. Following the footsteps of his father,Imran begin his delivery in a gentle tone and build steadily to a very high energy level in order to induce hypnotic state both among the musicians and within the audience.The instrumental prelude complimented by harmonium and table was followed by improvised variations of the melody. His members joined in the singing of the verses thus constituting the refrain. The lyrics of the main verses sent the audience in a trance casting a spell binding affect in the hall.

If one digs into history,Qawwali music was introduced in the 13th century in India by none other than the great Sufi saint Amir Khosrow by fusing Persian, Arabic, Turkish and Indian tradition informed Imran Aziz Mian while talking about the origins of qawwali, also acknowledging that gathering of such nature to listen to qawwali is called Mehfil-e-Sama. The poetry selected for such occasions is implicitly understood to be spiritual in its meaning, even though the lyrics can sometimes sound wildly secular, or outright hedonistic, he explained.

Sufi qawwali in Pakistani music genre revolves around    love, devotion and longing (of man for the Divine).But in the context of qawwali, these songs of intoxication and yearning use secular metaphors to poignantly express the soul’s longing for union eventually with the divine and its joy in loving the Divine. Similarly, many of Aziz Mian’s renditions are taken to be in spiritual context attaining spiritual knowledge. The words frequently used in the famous qawwali’s of his, like “wine” (sharaab) represents “knowledge of the divine”, the “cup-bearer” (saaqi) is God or a spiritual guide, the “tavern” the metaphorical place.

It is being said that the reaction to Qawwali is intended to bring everyone involved to a spiritual union with God and in bringing listeners to a state of religious ecstasy hypnotizing both performers and listeners… and Imran Aziz main successfully managed to achieve that challenge .

As the clock struck 3:00am, Imran’s finale, damadum must qalander served the cherry on the top. The audience was swinging in ecstasy and some devotees where physically performing dhamaal near the stage.

The night came to an end with the announcement for suhoor, setup in the foyer and Aangan area with spacious sit-down seating arrangements.  Piping hot puri’s swimming in the oil wok were dished out fresh for the guests alongside assortments of nan from tandoors, paratha from woks and breads from toasters. A wide variety of food to choose from was on display but the beeline at the Lassi stall indeed was the show stopper.