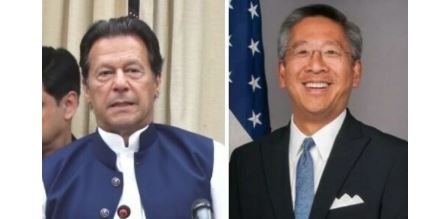 ISLAMABAD, MAY 23: PTI Chairman Imran Khan on Monday called for the sacking of US Assistant Secretary of State for Central and South Asia Donald Lu for “sheer arrogance and bad manners”.

Lu is the central figure in Imran’s claims about a US-backed regime change conspiracy that toppled his government through a no-confidence motion. The PTI chairman accuses Lu of threatening Pakistan’s former ambassador to the US, Asad Majeed, that a failure to remove Imran through a no-confidence vote would herald “consequences” for Pakistan and vice versa.

Imran also alleges that the threat was made even before the no-confidence motion was tabled and it subsequently started a chain of events that resulted in his ouster as local abettors and conspirators joined with the claimed conspiracy.

The PTI chairman repeated his claims in an exclusive interview on CNN programme Connect the World and lashed out at Lu while calling for his sacking. “Imagine telling the ambassador of a country of 220 million people that you get rid of your prime minister,” he added.

Questioned on why he had neglected to make his claims public earlier when he was so “specific” about their details, the PTI chairman said he had placed the cypher — containing details of the meeting between Lu and Pakistan’s ambassador — before his cabinet which was later presented in a meeting of the National Security Council (NSC).

Anderson pushed back against the PTI chairman and asked him if had gotten in touch with the US president or state secretary regarding the matter. Imran did not provide an answer, instead saying that the NSC meeting had decided to issue a demarche and a protest was registered to the US in Pakistan and Washington.

To a question about Foreign Minister Bilawal Bhutto-Zardari’s stance on Pak-US relations and whether Imran believed that a good bilateral relationship was in Pakistan’s interest, he responded: “I had a perfectly good relationship with the Trump administration. It’s only when the Biden administration came, it coincided with what was happening in Afghanistan and for some reason — which I still don’t know — they never got in touch with me.”

Anderson said the US had “rubbished” the notion that it was involved in a regime change in Pakistan and asked Imran if he “genuinely” believed his claim of there being a foreign conspiracy to topple his government.

The PTI chairman responded that the US embassy was calling and meeting disgruntled PTI members even before the meeting between Lu and Pakistan’s then ambassador to the US. “What were they meeting [US officials] for? They were the first ones to jump ship and they were the ones who then offered million dollars each to buy my other MNAs who jumped ship later on.

“Why would the US embassy be interested in our party backbenchers?” Imran said.

Anderson closed the interview with a question on whether Imran would run as a prime minister again, to which he predicted that the PTI would become the “biggest party in Pakistan’s history because people are so incensed and feel insulted that these criminals have been foisted over us … there is anger in Pakistan … there is anti-Americanism”.

Referring to prior examples of alleged US-backed regime changes in Iran and South American countries, Imran said resentment increased against the US when unpopular governments were brought to power. “Unfortunately, yes, there is anti-Americanism right now,” he added.