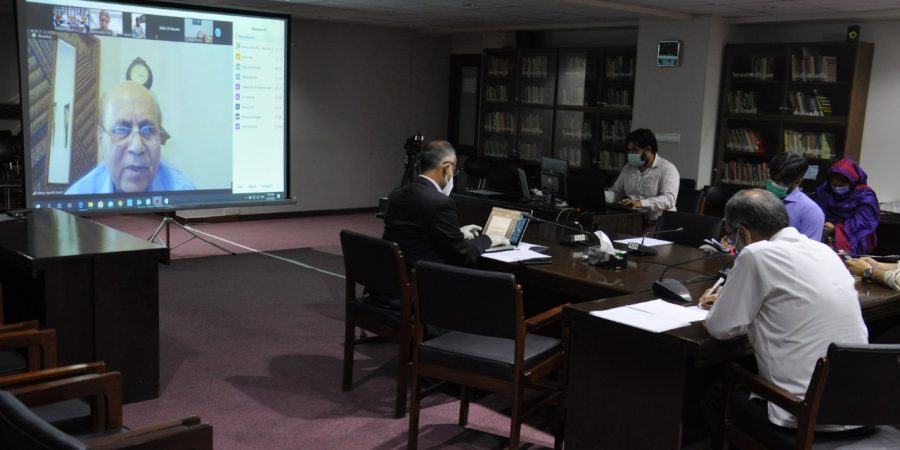 ISLAMABAD, JUNE 16 (DNA) – The declining state of governance affairs has been evident from the government’s tackling of Covid-19 whereas the recent crises of petrol, wheat and sugar has exposed its deficiencies even further.

The present budget was an opportunity in the wake of the pandemic to address the country’s chronic problems, but the non-innovative routine exercised by the government has failed to pacify even much-curtailed expectations.

Shedding light on the financial constraints faced by the government in managing its businesses, Almas said that the federal government’s revenue – after paying the due share of provinces – was around 3.7 billion, which is not even enough to pay interests and principal amounts of loans, and hence, the government will start its business with a deficit of Rs 1 trillion.

In addition, he said, the provinces, despite having autonomous powers of managing most of their issues post 18th amendment and getting major share of revenues from federal collections, still look towards the federal government in dealing with the calamities like pandemic.

He said that the exports at present were showing a very grim situation and remittances too were declining due to the pandemic. The bankruptcy of various small entities due to the outbreak of pandemic also needed immediate intervention of the government. One of the positive developments however compared to the previous year was a significant increase in FDI (Foreign Direct Investment), whereas the declining trends in inflation and low policy rate may also provide some relief to the public, he stated.

Criticizing the non-innovative approach adopted by the government in preparing the budget, Hamid Hasan rued that though the budget is being presented in exceptional times, the priorities of the government in dealing with the pandemic were not portrayed in it very well. The tax target was very ambitious in the current economic circumstances, the reduced subsidy on the power sector will cause increased power tariffs, whereas the increase in petroleum levy means the government does not intend to pass the benefits of low international oil prices to the general public. The loss of 2 million tons of wheat crops due to the locust attack signals that the country is going to import wheat to fulfill its domestic demand, whereas the budget also does not address climate change, despite the fears of high floods in the Monsoon season.

Dar highlighted chronic issues which were hindering the growth in taxes. One of the major issues, according to Dar, was that most of the FBR taxes were related to consumption whereas in order to increase the tax revenues, consumption patterns were needed to be changed. The pattern of expenditure on non-revenue yielding sectors was pointed to as another area by the speaker that needed attention. He also emphasized on the need of reallocation of budget on education and health sectors since both of them play a significant role in generating economic activity. He said that the budget exercise is considered to be the biggest activity of the economy but the current budget was posed as a mere fulfillment of a constitutional responsibility. Foreseeing high inflation of double figures in the upcoming fiscal year, the speaker feared a major shortfall in tax growth, especially considering the current economic condition and unrealistic government policies.

Dr Atiquzzafar Khan pointed out that the government has increased the share of higher education in current budget slightly but it is not enough to compensate the damages done by the financial cut in previous year’s budget. The outbreak of pandemic halted the provision of education services which is bringing a severe financial crunch for the academic institutes. The role of HEC has also become controversial due to its illogical policies whereas the involvement of political pressures in its hiring process has complicated the matter even further, he added.

Dr Shah said that the increase in unemployment due to pandemic has reduced the incomes which subsequently impact the spending of the general public. He suggested that the government should work on war footings to develop comprehensive policies regarding epidemic and pandemic diseases.

He was of the view that a lack of seriousness in preparing the current budget is hinting at the probability of various mini budgets being brought throughout the upcoming fiscal year. He was of the view that social security programs were not a long term solution, instead steps should be taken to promote self-sufficiency of individuals through proper capacity building programs. In addition, he also advised the government to encourage private sector charity organizations specially following their proactive and efficient role in providing relief activities in the time of pandemic. DNA