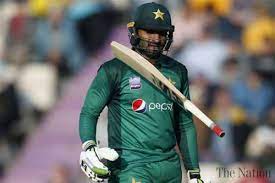 DUBAI , NOV 05 : Hard-hitting Pakistani batsman Asif Ali was on Thursday nominated for the ICC Player of the Month award along with Bangladesh s star all-rounder Shakib Al Hasan and Namibia s David Weise for the month of October.

Asif Ali s T20 World Cup fireworks in Pakistan s lower order have earned him a nomination, with a blitz of 27* from 12 balls in a win over New Zealand followed up by an extraordinary performance against Afghanistan, hitting four sixes in the 19th over to seal an important third victory at the tournament.

On the other hand, Shakib Al Hasan, who played six T20Is last month, has been ruled out of the T20 World Cup due to an injury.

Impressive Namibia all-rounder batter Wiese has had a spectacular T20 World Cup so far. He played eight T20Is, scoring 162 runs with a strike rate of 132.78 and took seven wickets with an economy rate of 7.23.

His match-winning performances helped Namibia qualify for the Super 12s stage of the tournament, where he scored a 66 not out against the Netherlands and 28 not out against Ireland, while also contributing with the ball.

An independent ICC Voting Academy and fans around the world will now vote to decide the winners, which will be announced next week.

In the women s category Ireland all-rounder Laura Delany and batter Gaby Lewis made the cut along with Zimbabwe captain and all-rounder Mary-Anne Musonda.