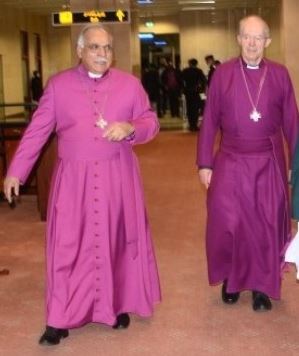 ISLAMABAD /DNA/ – The Prime Minister highlighted the importance of interfaith harmony, religious tolerance and affinity amongst the peoples of different faiths. He reiterated his government’s resolve to protect the rights of minorities as enshrined in the Constitution of Pakistan.
The Prime Minister conveyed that Pakistan was a culturally diverse country and is home to various religious minorities including Hindus and Christians and all of them are living peacefully and contributing to the development of Pakistan. He lamented that minorities in India, including Muslims were being subjected to worst kind of religious discrimination and intolerance.
The Prime Minister shared that his government has established Rehmatul lil Alameen Authority to promote true message  of Islam which is inter faith harmony and peaceful co-existence of mankind.
The Archbishop of Canterbury said that religious tolerance and peaceful coexistence of mankind is need of the hour.  Earlier the Archbishop of Canterbury Justin Welby participated at the Sunday mass at Peshawar’s All Saints Church and delivered a message of peace and religious harmony.