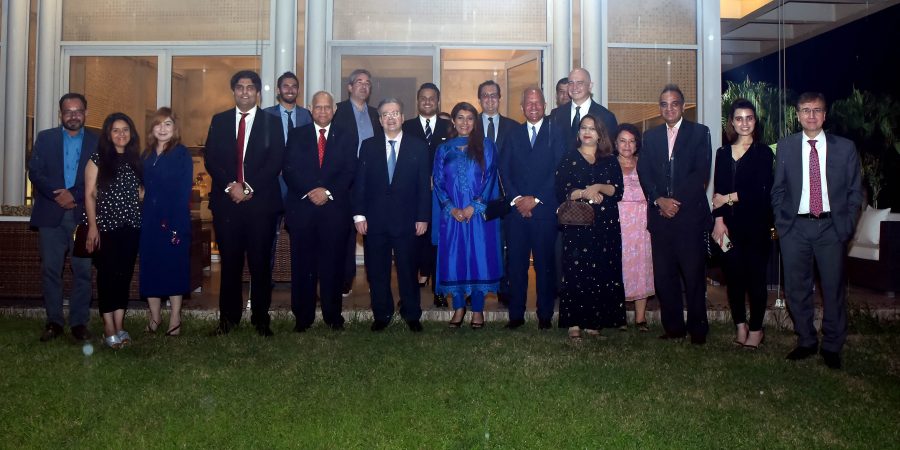 ISLAMABAD:  Ambassador France Nicolas Galey hosted a farewell reception for the outgoing Deputy Head of Mission Yves Manville who is leaving Pakistan in September after completing his term.

Ambassador Galey was all praise for the great diplomatic and communications skills of Mr. Yves and admitted he learnt a lot from his experience. The ambassador said it was a pity that he was leaving but then that is what diplomacy is all about, he added.

The ambassador said Mr. Yves will of course be heading towards yet another destination, which he cannot announce yet but for sure the new destination will match his talent and expectations. The ambassador particularly mentioned his professional role during the pandemic and the caricatures issues. In both cases, Yves put in his best efforts to handle the situations effectively.

Ambassador Nicolas Galey could not resist himself by praising Mr. Yves for his objective and in-depth analysis about the political and economic situation of Pakistan. The veracity and accuracy of his analysis proves himself to be an expert on the regional matters having deep knowledge of Pakistan polity.

The ambassador wished him best of luck for his all future endeavours.

The outgoing Deputy Head of Mission Yves Manville in his remarks thanked the Ambassador of France for hosting a farewell dinner and providing him with an opportunity of meeting with a galaxy of friends. Yves particularly mentioned Ikram Sehgal whom he met for the first time in Brussels during the water conference. Since then, he said Mr. Ikram has been a close friend from whom he had learned a lot of things. He also made a mention of the book of Ikram Sehgal and termed it a great source of information and learning.

Yves Manville thanked the presence of the members of the Eurasia group including the Additional Secretary Ministry of Foreign Affairs and former MOFA spokesperson Aysha Faroouqi.

It may be mentioned here that The University of Le Havre, the largest port in France (and ranked ninth largest port in Europe) hosted the eighth session of a Europe-Asia symposium devoted to the emergence of Eurasia (under the title: “ The completion of Eurasia?”), in May 2022.

For the first time, representatives of Pakistan were invited, including a representative of the Pakistani Ministry of Foreign Affairs. Four Pakistanis, two women and two men, two online and two physically, had attended the event.