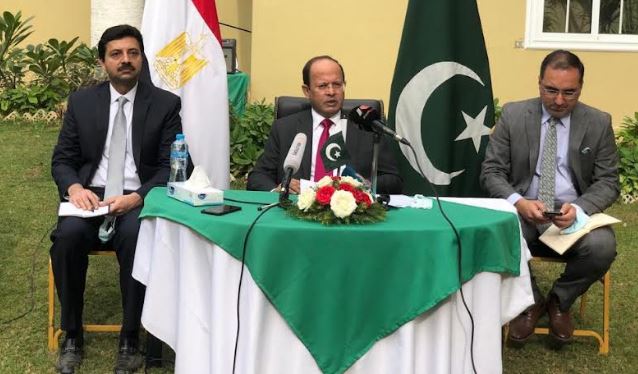 CAIRO, /DNA/ – The Ambassador of Pakistan to Egypt, Sajid Bilal briefed the Egyptian print and electronic media today about the 17th Extraordinary Session of the OIC Council of Foreign Ministers (CFM) being held in Islamabad on 19 December 2021. Speaking on the occasion, the Ambassador informed the media persons that the Extraordinary Session is being convened in view of the serious humanitarian situation in Afghanistan, where according to UN estimates 60% of the 38 million people face “crisis levels of hunger” and the situation is getting worse every day. He added that with the advent of winter, the situation could aggravate into the world’s largest humanitarian crisis, if left unattended. He added that continued engagement of the international community with Afghanistan is imperative.  The Ambassador further informed that the upcoming CFM would express Muslim Ummah’s solidarity with the Afghan people and would galvanize international support to arrest the fast deteriorating humanitarian situation in Afghanistan in the best interest of the people of Afghanistan, the region and the world at large. Highlighting Pakistan’s consistent efforts for the well-being of the Afghan people, the Ambassador recalled that the first Extraordinary Session of the OIC CFM to consider Afghanistan’s situation was also held in Islamabad in 1980s. In the recent months, Pakistan’s Prime Minister and the Foreign Minister have extensively engaged with the world leaders to address the humanitarian situation arising in Afghanistan since August this year, he added.  The Ambassador emphasized that Pakistan is counting on the full support of OIC Member States and the international community to extend all possible support to the Afghan people; adding that Pakistan, on its part, will continue to stand with its Afghan brethren.  The briefing was attended by the media persons from the leading newspapers and media outlets.