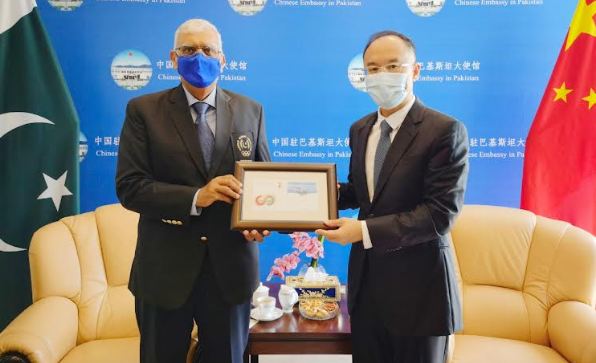 ISLAMABAD, OCT 8: Ambassador of People’s Republic of China to Pakistan Nong Rong in a meeting with President Pakistan Olympic Association (POA) Lt. Gen. (R) Syed Arif Hasan, hoping that 18th edition of Olympic Winter Games will be memorable event for all participants as all preparations to organize XXIV Olympic Winter Games are on track and completed as per schedule to be held at Beijing next year in a befitting manner.

He was speaking this during call on with Lt. Gen (R) Syed Arif Hasan, President Pakistan Olympic Association at the Embassy of China in Islamabad.

The meeting was held in context of the XXIV Olympic Winter Games Beijing 2022. The Ambassador informed President POA Lt. Gen (R) Syed Arif Hasan that all preparations are on track and completed as per schedule and that China is looking forward to welcoming all its guests in a befitting manner.

President POA assured complete cooperation and support with the Organizing Committee and NOC China for Beijing 2022 and thanked to Ambassador Nong for sharing the programs of the Games and measures in place for successful conduct.

He commended Beijing for being the first City to be hosting both the Summer as well as the Winter Olympics. He was confident that these Games will also be as magnificent as the Summer one and that the Pakistan contingent is excited and looking forward to it.