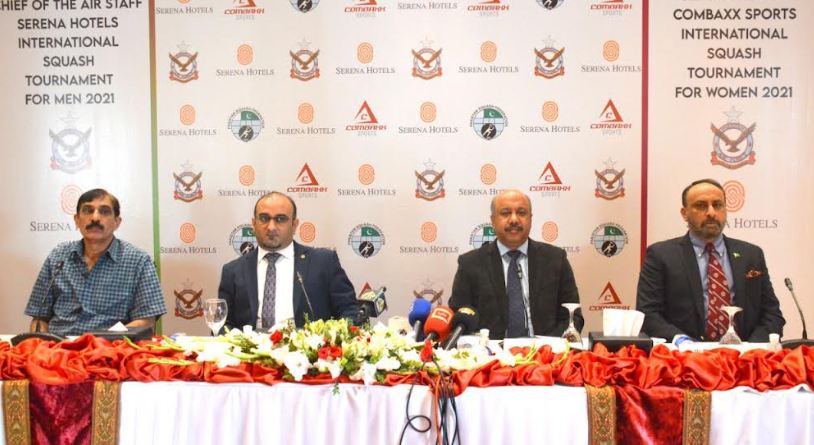 AFZAL JAVED
ISLAMABAD, Oct 08: Twenty Two international players from across the world are taking part in the Chief of Air Staff (CAS) International Squash Championships for men and women is going to start from October 11th (Monday) here at the Mushaf Squash Complex Islamabad.

The five day event is being organised by Pakistan Squash Federation (PSF) in collaboration with Serena Hotels and Combaxx Sports with the men’s event has a prize money of $30,000 whereas the women’s competition carries $12,000.
Pakistan Squash Federation (PSF) secretary Wing Commander Armghan Aziz along with CEO Combaxx Sports Omer Saeed and Serena Hotels, Senior Manager, Marketing and Communication, Hussain Odhwani during press conference said that the tournament is also being organised to provide opportunity to players from all across the country to challenge their mental and physical toughness.

“This tournament is a true manifestation of the PAF’s commitment in promoting sports both at national and international levels,” Armghan Aziz said, adding that besides Pakistan, world ranking Men & Women players from Austria, Czech Republic, Egypt, England, Espain, France, Hong Kong, Russia, Serbia and Switzerland are participating in these events.

He said that Pakistan Squash Federation (PSF) has been putting wonderful efforts for the elevation of Squash in the country, adding that PSF intends to send a message across the world that we have every potential to conduct mega squash activities and to host top world players in an efficient manner.

“Serena Hotels & Combaxx Sports have very kindly joined hand with PSF and Pakistan Air Force for the national cause of promoting squash in the country and we heartily appreciate the sports diplomacy initiative as shared by Serena Hotel as their integral part to build stronger relations with communities”, he said.

Pakistan has a tradition of excellence in many sports but competitive sports require the support of organizations through sponsorships and promotion. Earlier Pakistani squash players were the best in the world and we hope to bring back the laurel soon.

According to draws Pakistan’s Tayyab Aslam will be top seed along with Karim El Hammamy (Egypt) and Auguste Dussourd (France) second and third seed respectively in men’s event while Nadia Pfister (Switzerland), Marie Stephan (France), Salma Eltayeb (Egypt) are the top three seeds in the women’s event. Both championship main round will be starting from October 11th while semi finals will be held on October 14th and final will be played on October 15th.