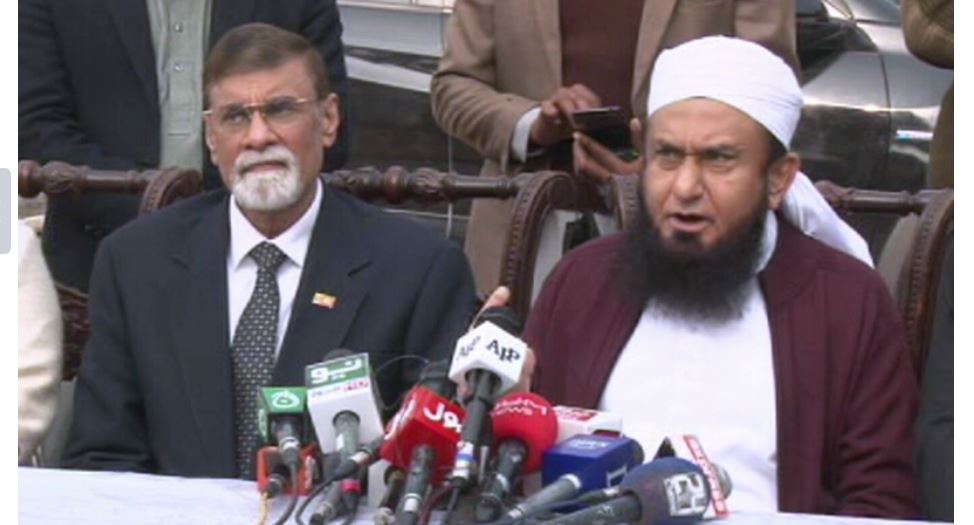 ISLAMABAD, DEC 22: Renowned religious scholar Maulana Tariq Jamil on Wednesday met Sri Lankan High Commissioner Mohan Wijewickrama and expressed grief at the lynching of Sri Lankan national Priyantha Kumar by a charged mob in Sialkot earlier this month, saying that the nation was “ashamed” at the act of “cruelty”.

Kumara, a senior manager at a factory in Sialkot, was tortured to death on Dec 3 by hundreds of protesters, including the factory employees, and his body was later burnt over allegations of blasphemy. The brutal killing drew widespread condemnation from political circles and human rights bodies.

A first information report was registered against 900 workers of Rajco Industries on the application of Uggoki Station House Officer Armaghan Maqt under sections 302, 297, 201, 427, 431, 157, 149 of the Pakistan Penal Code and 7 and 11WW of the Anti-Terrorism Act. Scores of suspects have been rounded up by law enforcers since then.

Sitting alongside Wijewickrama and Special Representative to the Prime Minister on Religious Harmony Hafiz Mohammad Tahir Ashrafi at the Sri Lankan Embassy in Islamabad today, Jamil said no one except the Almighty Allah had the right to burn anyone. “It was [an act of] cruelty that what our people committed”.”I told the [Sri Lankan] high commissioner that we are here to say sorry,” the cleric said.

Meanwhile, Ashrafi said that the educational expenses of the slain Sri Lankan national Kumara’s children would be borne by the factory owners for whom he worked, while the man who has replaced him was also a Sri Lankan.

“We are thankful to the Sri Lankans that in this atmosphere of fear, one of them chose to work here,” he added.

Kumara’s lynching has been widely condemned in Pakistan’s religious circles.

On Dec 7, days after the incident, clerics from various schools of thought had visited the Sri Lankan Embassy in Islamabad and unanimously condemned the lynching of Kumara, calling it “un-Islamic” and extrajudicial” as they demanded that strict legal action be meted out to those responsible.

The clerics had also issued a joint statement with Chairman Council of Islamic Ideology Dr Qibla Ayaz saying, “It was an inhumane act, and to accuse someone of blasphemy without proof is not in accordance with the Shariah.”

“The strictest possible legal action must be taken against these miscreants,” he had said.

« Babar Azam takes back top spot, ends 2021 as the No.1 ranked T20I batter (Previous News)
(Next News) Donations, scholarships worth $100,000 raised for Priyantha’s family in Toronto »