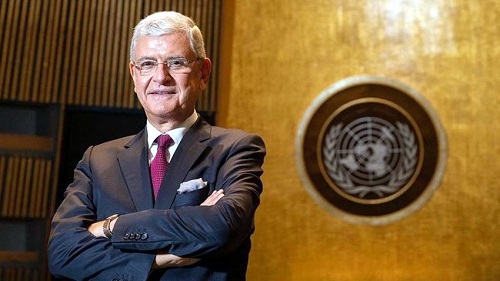 ISLAMABAD: President of the United Nations General Assembly (UNGA) Volkan Bozkiris will reach Pakistan on a three-day official visit today, where he would receive a civil award at the President House.

The Foreign Office while detailing the visit said that the UNGA president is undertaking a visit from 26-28 May 2021 to Pakistan at the invitation of Foreign Minister Makhdoom Shah Mahmood Qureshi.

During his stay in Islamabad, Bozkir will have detailed talks with the foreign minister and call on the leadership. The interactions will cover a wide range of political and socio-economic issues on the UN agenda. Mr. Bozkir will also deliver a talk on the “Importance of Multilateralism.”

Volkan Bozkir is the first Turkish national to preside over the UN General Assembly. He is a former diplomat and a senior politician. Following his 39-year long illustrious diplomatic career in the Turkish Foreign Service, Bozkir was elected thrice as a member of the Turkish Parliament and has served as the Chairman of the Parliamentary Foreign Affairs Committee and Minister for E.U. Affairs.

He also visited Pakistan in August 2020 before taking up the prestigious position of President of the UN General Assembly, the Foreign Office said while sharing the details.

The FO spokesman said that the visit of the UNGA president would lend an opportunity to showcase Pakistan’s active contributions to multilateralism and the central role of the United Nations in international affairs.

“Pakistan remains committed to supporting the United Nations General Assembly for the realization of shared objectives of maintaining international peace and security; economic and social development; promotion and protection of human rights; peaceful settlement of international disputes; and developing friendly relations among nations based on the principle of equal rights and self-determination of peoples, as enshrined in the purposes and principles of the UN Charter, ” the spokesman said.