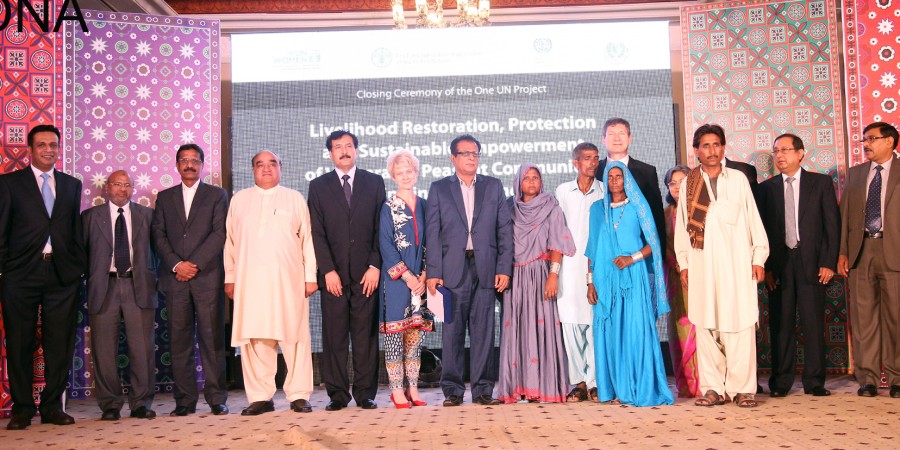 Talking at the closing ceremony of the One UN project of UN Women, FAO and ILO “Livelihood Restoration, Protection and Sustainable Empowerment of Vulnerable Peasant Communities in Sindh Province” funded by UN Trust Fund for Human Security (UNTFHS), he said this project is unique in structure and has improved the lives of the people by giving them a choice.

UN Resident Coordinator Neil Buhne said that multidimensional poverty is a pain to the society. Quoting from recent UN statistics, he revealed that poverty in Sindh touched the fearful figure of 75.5 percent. He proposed enforcing “ human security” on the principle of reaching first to the most secluded people.

He said that the project improved people’s life and choice and succeeded in devising principles to connect people. He described the project as unique in the sense that it gave the people voice.

Addressing the occasion Ms Ingrid Christensen, Country Director, International Labour Organization said that the ILO closely cooperate with other organizations at regional and global levels and achieving convergence and coherence on the orientation of major policies that impact on the world work. The ILO is recognized for its key contributions in making the work effective and efficient with local partners. In this particular project, ILO team closely worked with youth in achieving sustainable livelihood for the people.

She also spoke about the 2010 and 2011 floods of Pakistan and its adverse impact on Sindh, particularly Mirpurkhas and Dadu districts, highlighting the relief operations by FAO and ILO. Now, however UN WOMEN combined with ILO and FAO to complete the project that lasted for 3 years. She commended the unity of UN agencies and said she was inspired by the transformation in the life of the beneficiaries of the project.

Mr. Patrick T Evans, FAO Representative in Pakistan highlighted FAO’s on farm activities during the project. His team has worked hard with the local community to improve agriculture production, irrigation systems and soil management. Though it was government responsibility but we preferred to choose the flood affected areas and helped the peasant to improve the agricultural management, he added.

Talking at the ceremony, Mr. Altaf Bijarani Secretary Planning and Development said this project improved human security of families of beneficiaries and it was inspiring to see how the beneficiaries of the project were contributing to each other’s lives after being empowered as a result of this project.

Ms. Champa, the beneficiary said that lives of the local community have changed. We were hopeless after the heavy destructions of the flood, but this project restored their lives, she said. Mr. Allah Dita was also happy and expressed his joy, thanking the UN project that restored their lives.

This 3 year project was jointly implemented by FAO, ILO and UN Women in Dadu and Mirpur Khas Districts. The project was steered by the Planning & Development Department, Government of Sindh.