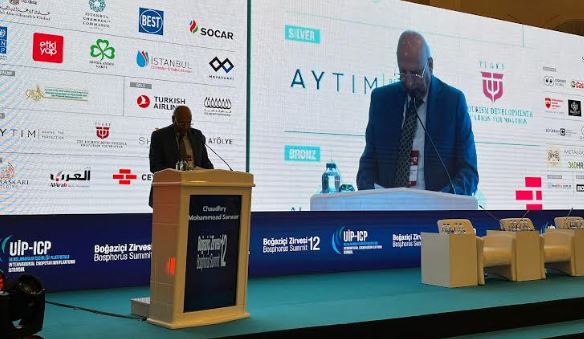 Istanbul, Dec 6 (DNA): Governor of Punjab, Chaudhry Sarwar was the keynote speaker in the opening session of the 12th Bosphorus Summit being held today at Istanbul, Turkey.

Speaking on the conference theme “Meeting the Challenges for a Better World”, Governor Sarwar highlighted that multilateralism, peaceful co-existence and commitment to an international system based on the UN Charter is the only viable way forward to meet global challenges faced by the world. He added that challenges arising out of the pandemic should be addressed through international cooperation and efforts be made to build a more productive and sustainable economy.

The Governor underlined the strong need to address global challenges like climate crisis, inequality among and within nations, the retreat of democracy, xenophobia, intolerance and Islamophobia, unilateralism, jingoism through collaboration in areas of geopolitics, economy, multilaterism, norms and technology.

While elaborating on Pakistan’s vision for future, Governor Sarwar highlighted Pakistan’s successful Covid response, globally acknowleged social protection initiatives, leadership in climate change agenda, commitment to be a catalyst for an era of geo-economics in the region and desire for peace and security.

He stated that Pakistan seeks to reap the peace dividends of a central geopolitical location for its people, the region and beyond and it is time for the international community to reaffirm its collective commitment to multilateralism. He reiterated that just resolution of longstanding issues of Palestine and Kashmir is paramount to international peace and security. Pakistan has always been an ardent supporter of an effective and efficient United Nations system, underpinned by the spirit of cooperative multilateralism and based on its three mutually reinforcing pillars – peace and security, development, and human rights.

On Afghanistan, Governor Sarwar emphasized the need for active and effective engagement of international community to stave off humanitarian disaster in the country and bring peace after four decades of war.