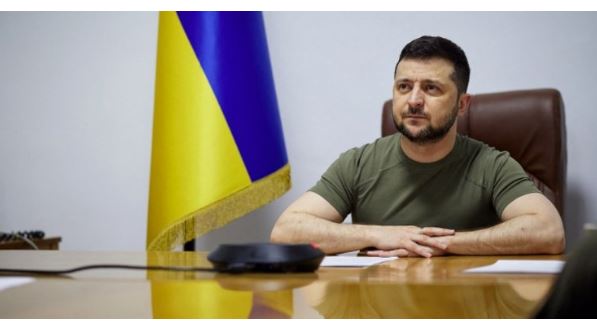 KYIV: Ukraine‘s President Volodymyr Zelenskiy described a fresh round of face-to-face talks between Russian and Ukrainian negotiators to be held in Istanbul, Turkey as “not bad.”

“A new round of negotiations is ahead because we are looking for peace, really, without delay. As I was informed, there is an opportunity and a need for a face-to-face meeting in Turkey. This is not bad. Let’s look at the result,” he said in a video address published early Monday by the presidential office.

“Our priorities in the negotiations are known. Ukraine’s sovereignty and territorial integrity are beyond doubt,” he said.

Zelenskiy underlined that “effective security guarantees” for Ukraine are “mandatory.”

“Our goal is obvious — peace and the restoration of normal life in our native state as soon as possible,” he added.

He stressed that the sanctions against Russia, “against the aggression,” are needed as long as Russian troops remain on the territory of Ukraine.

“The week is planned to be very busy, so no one will be able to hide the Ukrainian interest somewhere in political offices,” said Zelenskiy.

The next meeting of the Russian and Ukrainian negotiating teams will be held in Istanbul, the Turkish and Russian presidents agreed on Sunday.

In a phone call, Recep Tayyip Erdoğan and Vladimir Putin discussed the latest developments and negotiation processes in the Russia-Ukraine war, said a statement by Turkey’s Communications Directorate.

Stressing the need for an immediate cease-fire and peace between Russia and Ukraine as well as steps to improve the humanitarian situation in the region, Erdoğan said Turkey would continue to lend every kind of support to this process.

While Turkey’s Communications Directorate mentioned no dates for the meeting, David Arakhamia, a member of the Ukrainian negotiation delegation and the head of the Servant of the People faction in the Verkhovna Rada, Ukraine’s parliament, wrote on Facebook that the next round of negotiations between the Ukrainian and Russian delegations will be held in Turkey on March 28-30.

“Today, at the next round of video talks, it was decided to hold the next live round with the two delegations in Turkey on March 28-30. Details later,” he said Sunday.

On March 10, Turkey made headlines worldwide for hosting the Russian and Ukrainian foreign ministers in the southern Turkish city of Antalya, the highest-level meeting of the two sides since the war began on Feb. 24.

Turkey has won widespread praise for its efforts to end the war, helped by its unique position in having friendly relations with both Russia and Ukraine.

The war has been met with international outrage, with the European Union, U.S., and the UK, among others, implementing tough financial sanctions on Moscow.

At least 1,119 civilians have been killed in Ukraine and 1,790 injured, according to estimates by the UN, which cautioned that the true figure is likely far higher.