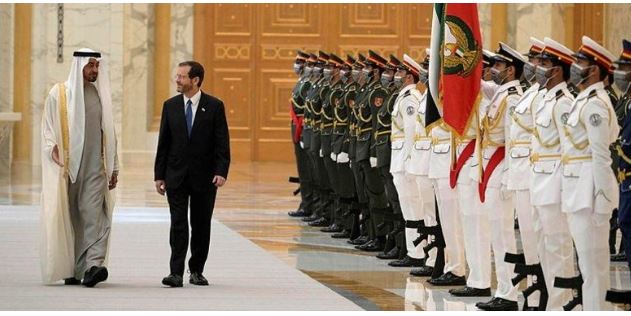 Crown Prince Mohammed bin Zayed welcomed Herzog to the al-Watan palace in the capital Abu Dhabi in an official ceremony ahead of their talks, the Emirates’ official news agency WAM reported.

The two countries’ national anthems were played and 21 rounds of artillery were fired to mark the visit, WAM added.

Herzog’s office said the meeting was “warm and cordial,” and that it lasted over two hours.

In 2020, the UAE and Bahrain became the first Gulf countries to establish diplomatic relations with Israel through US-brokered pacts.

Until then, only two Arab states, neighbouring Egypt and Jordan, had maintained diplomatic relations with Israel.

Speaking in Abu Dhabi, Herzog said, “We are sending a message to entire region that there is an alternative of peace and living together, and that the sons and daughters of Abraham can reside and dwell together in peaceful coexistence for the benefit of humanity.”

“The Middle East has entered a new era thanks to the crown prince and other leaders’ wise and brave decision to normalise ties,” he wrote on Twitter, adding that Israel and the UAE’s “bold new partnership” was discussed during his landmark trip.

During the two-day trip, Herzog also plans to open Israel’s National Day at Expo 2020 in Dubai, an economic hub of the UAE.

In addition, he will meet representatives of the Jewish community, a statement from his office said.

“I bring with me a blessing and a message of peace for the peoples of the entire region,” Herzog said before his departure.

The pilot told passengers over the tannoy: “We are now right over Saudi Arabia. We are making history! We shall soon fly over the capital city.”

Herzog, according to his office, entered the cockpit, looked out over the Saudi landscape, and said: “No doubt, this is truly a very moving moment.”

Last year, the Emirates opened an embassy in the Israeli coastal city of Tel Aviv. The two countries have also established direct flights.

Economic considerations are seen as the main driver of the rapprochement, but the countries are also forming an alliance against Iran.

Arab states have long refused to establish ties with Israel, saying any normalization must be contingent on a resolution of the Palestinian conflict