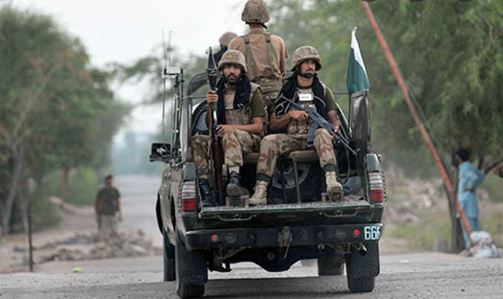 According to the army’s media wing, Naib Subedar Javed Iqbal (42), resident of Attock and Naik Hussain Ahmed (38), resident of Okara were martyred in an Improvised Explosive Device (IED) explosion in Eesham area.

The area has been cordoned off and a search operation is underway to hunt the terrorists. Earlier, a squad of the Pakistan military came under attack from terrorists across the border in North Waziristan, in which a soldier embraced martyrdom.

The military condemned the use of Afghan soil against Pakistan and urged Kabul to take action which prevents such an incident from taking place again. It added that the military was resolute in its resolve to protect the borders of the country.

President Dr. Arif Alvi has expressed deep grief and sorrow over the martyrdom of Naib Subedar Javed Iqbal and Naik Hussain Ahmed in an IED blast in North Waziristan. In a statement on Sunday, he said nation is indebted to the martyrs who sacrificed their life while protecting the motherland. =DNA

« UAE hands over 30 containers of food medicine, tents to NDMA (Previous News)
(Next News) ‘Well-researched data and policy a must to develop resilience to COVID-19’ »