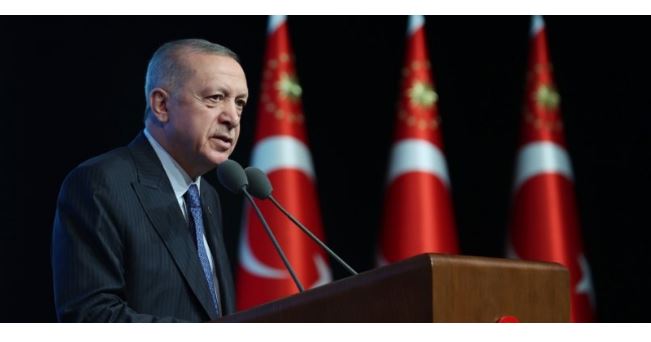 In a video message sent to the launching ceremony of the third vessel of the MILGEM Ada class corvette-a joint venture of Turkey and Pakistan, Turkish President Recep Tayyip Erdoğan emphasized on Friday the necessity of providing all means of support to strengthen the military infrastructure of Pakistan, “whose security, stability and prosperity we consider equal to ours.”

ANKARA, MAY 20: Turkey will provide all support needed to strengthen Pakistan‘s military infrastructure, the nation’s president said on Friday.

In a video message sent to the launching ceremony of the third vessel of the MILGEM Ada class corvette-a joint venture of Turkey and Pakistan, Recep Tayyip Erdoğan said: “The production process of all these ships, which are equipped with the most modern weapons and sensor systems developed by our country, continues as planned.”

In July 2018, the Pakistan Navy signed a contract for the acquisition of four MILGEM-class ships with Turkey’s state-run defense firm ASFAT. According to the plan, two corvettes are to be built in Turkey and the next two are to be built in Pakistan, which also involves technology transfer.

The Turkish leader said the deliveries of the ships, which will be able to perform all kinds of military duties from air defense to submarine defense, will be made at six-month intervals starting from August 2023.

With an emphasis on the deep-rooted historical ties between Turkey and Pakistan, Erdoğan said the project is one of the most concrete and recent examples of it, voicing hope for the project to be “a harbinger of greater cooperation.”

He said Pakistan is the country with the most strategic location in South Asia. “Throughout history, this region has been the apple of the world’s eye with its ancient culture and wealth. Pakistan and its people have a special place for us.”

Erdoğan also emphasized the necessity of providing all means of support to strengthen the military infrastructure of Pakistan, “whose security, stability and prosperity we consider equal to ours.”

The other vessel of the project, named Kaibar, is to be launched in September in Istanbul, he said.

MILGEM vessels are 99 meters (325 feet) long with a displacement capacity of 24,00 tons and can move at a speed of 29 nautical miles. The anti-submarine combat frigates can be hidden from radar.

In October 2019, Erdoğan, along with then-Chief of Pakistan Navy Adm. Zafar Mahmood Abbasi, had cut the metal plate of the first MILGEM Ada class corvette during a ceremony in Istanbul.

Turkey is one of the 10 countries in the world which can build, design, and maintain warships using its national capabilities.