Terrorist activities will not be allowed to occur again at any cost: Rashid 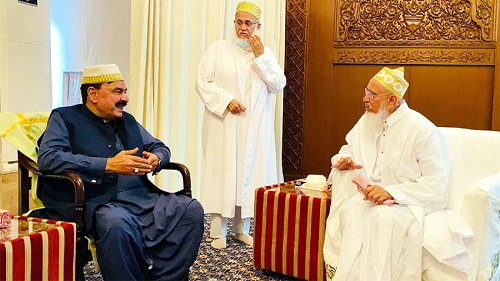 Islamabad : Interior Minister Sheikh Rashid Ahmad has said that terrorist activities would not be allowed to occur again at any cost.

Talking to media persons after meeting the spiritual leader of the Bohra Community in Karachi, he said the whole nation is united and standing shoulder to shoulder with the armed forces against terrorism.

The Interior Minister said Pakistan has one of the best armies of the world.

Meanwhile, talking to a private news channel, the Interior Minister said government is committed to hold next elections through Electronic Voting Machines.

He said overseas Pakistanis will also be given the voting right in the general elections.

He said it is duty of the government to provide food items at affordable rates and the mafia, who is responsible of price hike, would be held accountable at every cost.

Replying to a question, the Interior Minister said people of Sindh have been deprived of basic amenities in the past, but the present federal government is doing its best to address their grievances.

To another question regarding PML-N leadership, Sheikh Rashid said the looters and plunders of the national exchequer have no future.