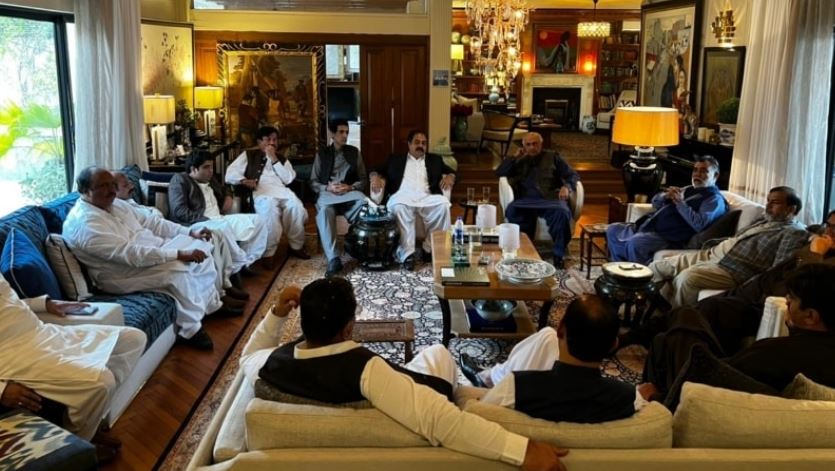 LAHORE, MAR 7: The group of lawmakers led by estranged PTI leader Jahangir Khan Tareen converged at his Lahore residence on Monday as the opposition charged ahead with its plans to table a no-confidence motion against the government.

Interestingly, PTI leader Abdul Aleem Khan, a former Punjab minister and a close aide of Prime Minister Imran Khan, was among the participants.

According to sources, Tareen — who is currently in London seeking medical treatment — will address the meeting via video link. Reportedly, the Tareen group comprises 30 PTI MPAs from south Punjab and eight MNAs.

Punjab chief minister’s former adviser, Awn Chaudry, was also among the attendees and was hounded by reporters as he made his way inside.

Speaking to reporters camped outside, Chaudry asked them to “let some of the suspense remain”, adding that whatever will happen will be for the best.

“Are you with the opposition or with the government?” asked one journalist.

“Whatever will happen will be for the best,” he reiterated with a smile. He added that the members of the group would welcome Abdul Aleem Khan, saying that he was their “brother”.

“Have some patience. Watch and see what will happen,” he said, moving inside.

The meeting of the Tareen group comes as the Pakistan Demo­cratic Movement (PDM), an alliance of opposition parties, is in the process of finalising a no-confidence motion against the prime minister, claiming to have the support of enough lawmakers in the parliament to make the ouster a success.

Last month, the PML-N had confirmed the party was in touch with the disgruntled group to seek its support to oust the government. At the same time, the group had also met at the residence of PML-Q leaders, who are a key ally of the PTI government in Punjab and centre.

Speaking to reporters at the time, Tareen said the purported no-confidence motion had not been tabled yet and it was not clear whether it would be at all.

To a question about any contacts with the opposition, he said the group had gathered after a long time and it was yet to be seen how it should play its role in the current political scenario.

He further maintained political leaders stayed in touch with each other, adding the group would hold more huddles to discuss their future strategy.

Tareen said they also talked about inflation during the meeting, but nothing specific about the no-confidence motion. “It is premature to discuss this issue,” he had said, urging the premier to provide relief to the masses.

Subsequently, it was reported that PM Imran reached out to Tareen in what appeared to be a bid to ensure he hadn’t lost his old friend to the opposition.