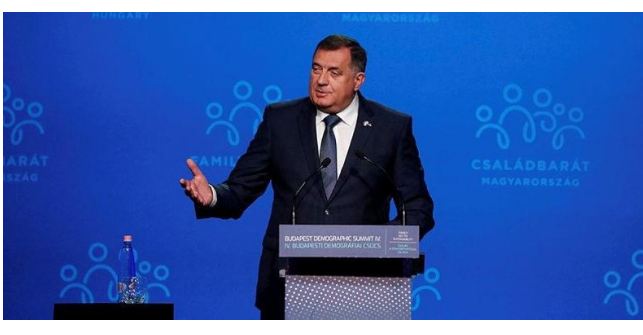 Several EU countries support the dissolution of Bosnia and Herzegovina, the Serb member of the country’s Presidency Council said c.

Speaking on a TV program, Milorad Dodik said: “seven EU countries support the independence of Republika Srpska,” one of the two entities that make up Bosnia and Herzegovina, without naming the countries in question.

During the program, Dodik accused the High Representative of Bosnia and Herzegovina, as well as the country’s constitutional court, of taking decisions against the Dayton Agreement, which ended the war in the country during 1992-1995.

He said the constitutional order in the country had been overturned and reiterated a pledge that Republika Srpska would declare independence if the Dayton Agreement is not returned to its original form.

Dodik has heavily opposed a recent law imposed by the former high representative in July banning genocide denial in the country. He has since vowed to withdraw Republika Srpska from the joint military with the Federation of Bosnia and Herzegovina, the country’s other entity, as well as other state institutions including its taxation authority and police force.

Meanwhile, EU spokesman Peter Stano said in a press conference that putting the integrity and sovereignty of Bosnia and Herzegovina into question was not acceptable for the bloc.

“The stance of the 27 members of the EU is … very clear. It is a very strong and firm commitment to the sovereignty and territorial integrity of Bosnia and Herzegovina,” said Stano, calling for an end to divisive rhetoric.

« Passing marks: Fate of thousands of students hangs in the balance (Previous News)
(Next News) Sustainable Tourism; The only Requirement »