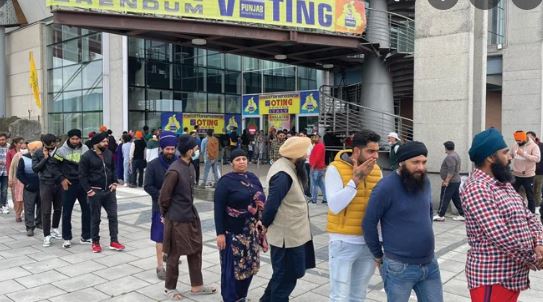 ISLAMABAD, /DNA/ – Thousands of Sikhs gathered in Rome, the capital of Italy on Sunday to vote in the referendum for achieving their separate homeland Khalistan.

Men and women arrived at the polling stations to cast their vote in the referendum organized by Sikhs for Justice (SFJ).

The voters were carrying posters in support of the freedom of Khalistan and shouting slogans against the Indian government and the Indian army.

They were demanding that India should give freedom to Khalistan and the international community should take notice of the oppression against the Sikhs. About 200,000 Sikhs live in different cities of Italy.

Sikh voters while expressing their opinions said referendum was a constitutional and legal path adopted by them and India should end its occupation of Punjab so that Khalistan could be created.

On this occasion, Sikhs also released the new map of their homeland Khalistan which not only included the state of Punjab but also Haryana, Himachal Pradesh, Rajasthan and many districts of Uttar Pradesh.

The referendum was witnessed by international observers.

The Sikh voters said they were laying foundation of freedom from India and they wanted their separate homeland Khalistan.

Despite the pressure from India, the European government allowed Sikhs to hold a referendum on the issue of Khalistan.

Sikh leader Paramjeet Singh Pamma said the referendum for Khalistan was the democratic right of Sikhs.

He said the singer Sidhu Moosewala who was killed by the Indian agencies, was a great supporter of the freedom of Indian Punjab.

The Sikh community had been demanding for a separate homeland Khalistan for the last many decades and before that it had held voting for the referendum in seven countries including Britain and Switzerland to push the drive for creation of Khalistan.