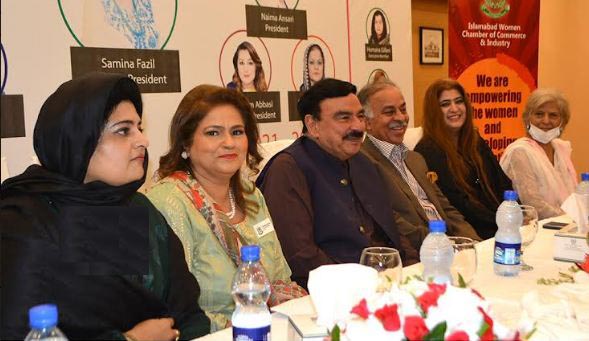 ISLAMABAD, SEPT 29 (DNA) – Interior Minister Sheikh Rashid on Wednesday said that government is trying its best to empower women which is a vital factor for wellbeing and growth of a nation.

He said that government is serious about providing equal rights, responsibilities and opportunities to all genders.

The present government of has taken several significant measures that promote social inclusion, gender equality and women empowerment, he added.

Sheikh Rashid said this while speaking to the 12th Annual General Meeting (AGM) of Islamabad Women’s Chamber of Commerce and Industry (IWCCI) in which Naima Ansari was elected as President unopposed for the year 2021-22.

The Federal Minister said that every person should have equal access to health, education, water and sanitation, and growth which is imperative for ending hunger and poverty.

Representation of women in public as well as private sector organizations improves performance due to better decision-making, he said, adding that pay gaps, limited mobility, discrimination, and lack of job security are some of the barriers towards women empowerment.

These challenges have now been aggravated by the pandemic which has resulted in new obstacles to building inclusive and prosperous societies, he said.

Speaking at the occasion, Founder President IWCCI Samina Fazil said that gender gaps already existed in our society which have been augmented by the pandemic.

The pandemic has damaged majority of the businesswomen and we would like to remind the minister regarding his promise to establish markets for women.

She said that majority of women in Pakistan work in the non-formal sector, where they work for long hours with low wages, no benefits and no job security.

Newly-elected President IWCCI Naima Ansari said that according to the Global Gender Gap Report 2021, Pakistan ranked 153rd out of 156 countries as per gender parity index.

There is a great deal of evidence that societies that discriminate on the basis of gender pay a price in more poverty, slower growth, and a lower quality of life, whereas gender equality enhances development, she added.

Empowered women and girls can become a powerful force and contribute to the well-being of their families and communities. The nonexistence of gender equality entails enormous loss of human potential as well as for development, Naima Ansari informed.

DG SASSI Maria Sultan, Secretary General of UBG Zafar Bakhtaqri, Chief Coordinator UBG Malik Sohail and  elected office bearers said that women and girls, men and boys must have equal access to all opportunities while women are central to development. Women also make an important contribution to the money economy by their work in both the formal and informal sectors, but these roles are often ignored.

It is critical to address the structural causes of gender inequality, such as violence against women, economic empowerment, decent workplace environment, skill development, resource mobilization, etc.

« Govt Decides To Get Shaukat Tarin Elected On Senate: Sources (Previous News)
(Next News) Taliban accuse US forces of violating Afghan airspace, call for upholding commitments made in Doha »