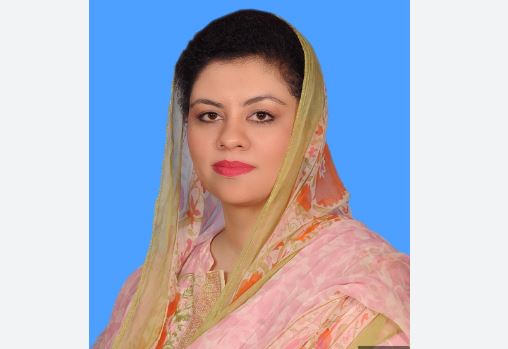 Addressing a press conference here on Wednesday, Kanwal Shauzab said that Fazal Rehman was known for speaking such filth and mudslinging against women for taking part in politics but no action has been taken against him hitherto.

She said that Islam gave great status to women that emphasized greatly on their sanctity and respect but this person hidden himself in the cloak of religion used such filth.

“We are followers of a religion that gave tremendous rights to women either they are mothers, daughters sisters and wife,” she added.

She said that Fazal Rehman even issued a fatwa against Benazir in 1993 but later become part her government but he was power hungry person.

Kanwal Shauzab stated that he used such improper language against PTI’s women because the PTI rendered him political orphan, as he could not win election even from his own constituency. Therefore, she added that he vent his frustration by foul talk because he could not even secure the slot of the President.

PTI leader went on to say that she could not call him as Maulana who was the engine of the PMD train, who used religious for his political motives.

She said that Maryam Aurangzeb, Hina Rabbani and Shazia Mari sat around this man but they did not dare to condemn his absurd remarks against women.

Kanwal Shauzab stated that Article 14 of the Constitution gave protection of the dignity and honor of every individual but the state was completely asleep, as no institution was speaking against the violation of the constitution and law.

She said that people were stripped and killed in this country but no organization of the state was taking action.

She raised question as to why PEMRA allow airing such vile and filth-filled speeches of Fazal.

“I express my sympathy with the women of Fazlur Rahman’s house, as how they are tolerating such a dirty person,” she added.

On one hand, she said that PTI Chairman Imran Khan enjoyed such a respectable status who built three state-of-the-art cancer hospitals after his mother’s name that every mother of Pakistan yearned and wished to have a son like him.

PTI leader said that every sister wished to have a brother who would become a source of respect and honor for the entire nation.

On the other, she said that Fazal Rehman was a ‘Satan’ under garb of human, who was being curbed by every woman of the country.

She urged the media to expose this man who was vomiting his internal filth due to his utter frustration for not being succeeded in getting the presidential slot.

PTI leader said that Fazal lost his senses; hence she suggested country’s top psychiatrist to cure him for free to save Pakistani women from him.

She requested the Chief Justice of Pakistan to take notice of rising human rights violations and take to task Fazal Rehman because Pakistani women would not tolerate such canalization, blackmailing character assassination anymore.