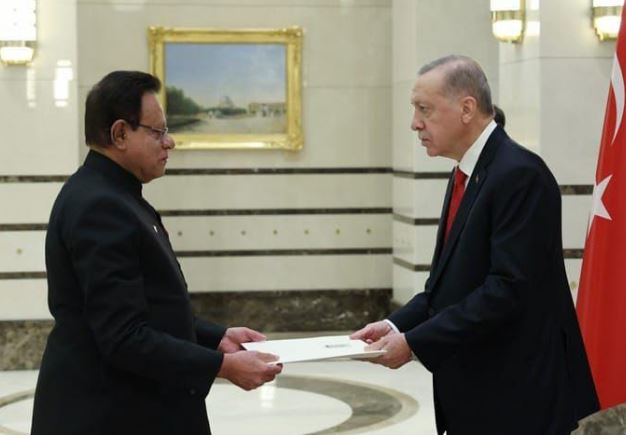 ANKARA, NOV 30: Ambassador of Pakistan to Türkiye, Yousaf Junaid presented his Credentials to His Excellency Recep Tayyip Erdoğan, President of Republic of Türkiye at a dignified ceremony held at the Presidential Palace in Ankara, Türkiye on 30 November 2022 – a day when both countries are celebrating 75 years of establishment of diplomatic relations.

The Ambassador, during his meeting with President Erdogan, conveyed to him greetings and best wishes from the leadership of Pakistan for the government and people of Türkiye and discussed matters of mutual concern including follow-up actions of the successful visit of the Prime Minister of Pakistan to Türkiye on 25-26 November 2022.

During the discussion, the Ambassador also expressed gratitude to Turkish leadership for standing with Pakistan in trials and tribulations and on matters of core interest. In particular, he thanked President Erdoğan for the prompt and meaningful assistance from Türkiye to Pakistan to deal with the devastation caused by the climate change-induced floods.

The Ambassador highlighted that the government of Pakistan placed a premium on trade, economic cooperation and connectivity, which will continue to be his priority areas during his tenure in Türkiye.

President Erdoğan stressed the exceptional nature of ties between the two brotherly countries and reiterated his support for further strengthening of cooperation in diverse areas. The President also congratulated the people of both countries on the 75th anniversary of establishment of bilateral diplomatic relations. DNA