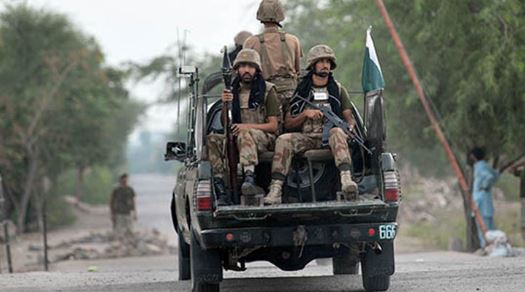 RAWALPINDI /DNA/ – On night 12/13 February 2022, based on information of presence of Terrorists in a Hideout in  Pasni, Balochistan, Security Forces conducted an operation to apprehend externally sponsored enemies of peace in Balochistan. Once the troops started cordoning the area, Terrorists tried to flee their hideout and opened indiscriminate fire. A heavy exchange of fire ensued. Resultantly, Terrorist Commander Hidayat aka Balaach was killed in the operation. He was involved in firing and IED attacks on security forces in Gwadar and Pasni areas. In addition, a large cache of arms and ammunition was also recovered. In another intelligence based operation conducted in District Khuzdar , security forces apprehended two Terrorists Niaz and Muhammad Jan alongwith 2 x SMGs and large quantity of ammunition.Operations to eliminate perpetrators of terrorist acts in Pakistan will continue and they will not be allowed to sabotage peace, stability and progress of Balochistan.