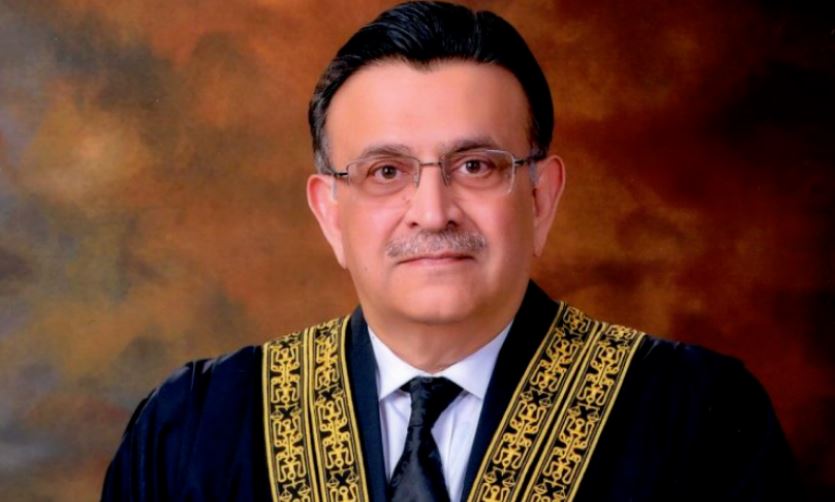 ISLAMABAD, MAR 19: The Supreme Court began hearing on Saturday a petition filed by the Supreme Court Bar Association (SCBA), urging it to direct all state functionaries as well as political stakeholders to allow peaceful execution of proceedings for the no-confidence vote in the National Assembly against the prime minister and prevent a possible “anarchic situation” that could result from the government and opposition clashing with each other.

Meanwhile, the top court’s registrar’s office said “no suo motu [notice] has been taken”. The statement comes shortly after reports that the SC had taken notice of the storming of Sindh House a day earlier.

During the hearing, Justice Bandial said the SCBA had approached the court and wanted enforcement of the law. The CJP asked Attorney General of Pakistan (AGP) Khalid Jawed Khan if he also wanted to approach the court, to which the AGP said a decision was made to file a presidential reference on Article 63(A) by Monday.

The chief justice said the SCBA wanted public order and implementation of Article 95 of the Constitution. He clarified the hearing was not a suo-moto proceeding as the court had previously received an application.

The CJP said the incident went against the freedom of speech, to which the AGP agreed, saying that there was no justification for it. Khan said he wanted to elaborate on the background of yesterday’s incident.

A day earlier, PTI workers stormed the Sindh House in Islamabad after protesting outside for hours against dissident MNAs who are staying in the building.

Television footage showed PTI workers climbing over the walls of Sindh House with some of them later breaking down the doors to enter the building. They also carried lotas in protest against “turncoats”.

The SCBA’s petition, a copy of which is available with Dawn.com, comes amid a heated political situation with the government and opposition trading barbs at each other and threatening to flex muscles in roadshows ahead of a crucial vote later this month that would decide the fate of Prime Minister Imran Khan.

The two sides have announced to hold rallies in the capital ahead of the parliament session, prompting fears of political instability and anarchy that the SCBA expressed in its petition.

In the plea filed with the Supreme Court on Thursday, the SCBA cited statements from the prime minister wherein he had said “I will fight against them until [my last breath]. I will face them and I am completely prepared for whatever [they throw my way]”.

It also included statements by Information Minister Fawad Chaudhry, telling lawmakers that they would have to pass through a million PTI supporters to enter the National Assembly on the day of the vote.

Likewise, the petition also quoted statements from opposition leaders including JUI-F chief Maulana Fazlur Rehman when he appealed to his workers to converge in Islamabad before the session “and stay on the Constitution Avenue till voting on the no-trust resolution and … provide safe passage to members to the Parliament House”.

The petition says circumstances involving confrontation between the government and the opposition could trigger an “anarchic situation” in the country.

“It is evident from the political history of our country that preventing the constitutional process from taking its course has produced dire consequence for democracy and rule of law,” the petition says.

It also demanded that officials tasked with the responsibility to maintain law and order in Islamabad must “prevent any assembly, gathering, public meetings and/or processions that could hamper the assembly proceedings or participation of members in the session”.

The plea also urged the court to bar authorities from taking any “coercive measures against, and including arrest and detention of the, members of the National Assembly”.