Punjab CM re-election to be held on July 22, orders SC 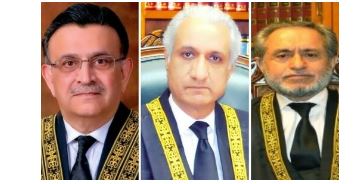 ISLAMABAD, JUL 1: After an hours-long hearing on the PTI’s petition against the Lahore High Court’s (LHC) order to recount the votes cast in the April 16 Punjab chief minister election today, and conduct a second round of voting if required, the Supreme Court on Friday said that this process would now take place on July 22 — five days after by-elections on 20 Punjab Assembly seats are conducted on July 17 — and that incumbent chief minister Hamza Shehbaz would remain in office till then.

The LHC had passed its order on Thursday while hearing the PTI and the PML-Q’s pleas against Hamza’s election and oath-taking, requiring the Punjab Assembly to convene today at 4pm to conduct the recounting exercise, excluding the votes of PTI dissident lawmakers.

The high court said if the required majority for Hamza — which is 186 votes in the 371-member strong house — to stay the CM is not secured after recounting, which is a certainty after the exclusion of 25 votes cast by dissident PTI lawmakers, the election will be held again under Article 130(4).

According to Article 130(4), in the second round of voting, a member will not require 186 votes but simply needs a majority of those “present and voting” to be elected the chief minister.

Punjab Chief Minister Hamza Shehbaz and Punjab Assembly Speaker Chaudhry Pervez Elahi, who is the PTI’s candidate for chief minister, also appeared before the court via video link as the PTI sought to defer the PA proceedings by seven days.

At one point, PTI’s counsel Babar Awan said that PTI had reservations against the Election Commission of Pakistan (ECP).

Justice Bandial, however, said that orders would be issued regarding the implementation of the election code of conduct.

He stated that the court would issue a general order and that the parties should not waste time on small matters. “It would be better if you don’t make the case a family dispute,” he told Elahi and Hamza.

PTI lawyer Imtiaz Siddiqui later told the court that consultation was held with the Advocate General of Punjab and Hamza’s lawyer and a consensus was reached on Hamza staying the CM till July 17.

At this, the CJP remarked that the court was glad both the parties had reached a consensus. “This is success for both the groups,” he said.

The CJP said that both sides had been at odds for three months and the matter had finally been resolved in the apex court in three hours.

He then asked: “CM sahab, do you have any intentions of rigging (the polls)?”

To this, Hamza replied that he would compete in the assembly and whoever is the suitable candidate would win.

“I am a political worker. I have spent years in jail. We will ensure free and fair elections are held,” he said.

Subsequently, Justice Bandial said that the court would use words acceptable to both parties in its written order.

He then announced that the elections for the chief minister would be held on July 22, adding that Hamza would remain CM until then.