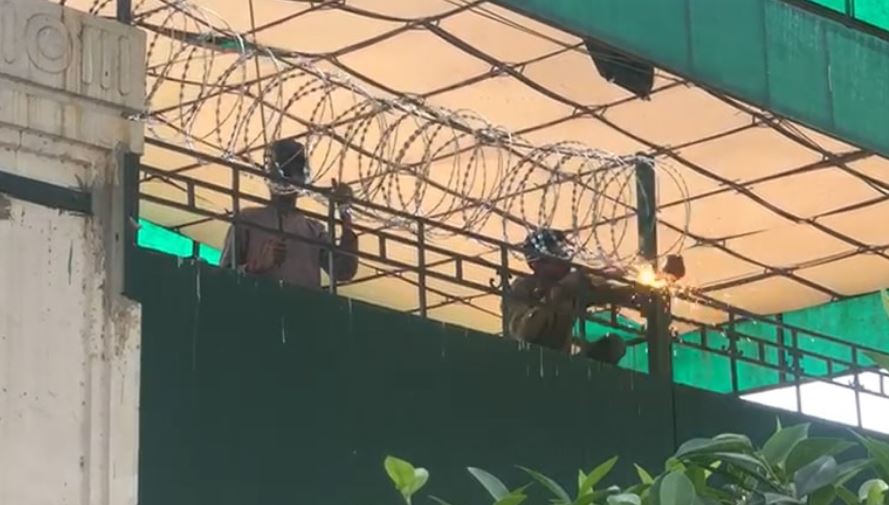 LAHORE, APR 6: The Punjab Assembly was sealed on Wednesday, with barbed wires installed atop its boundary walls, amid confusion over the scheduling of a crucial session for the election of the province’s new chief minister.

The development coincided with the submission of a no-confidence motion against Deputy Speaker Sardar Dost Muhammad Mazari after he said the session for the chief minister’s election would take place today at 7:30 pm, but a spokesperson for the provincial assembly and Pakistan Muslim League-Quaid (PML-Q) denied the development.

Reacting to the development, PPP Chairperson Bilawal Bhutto-Zardari decried that the deputy speaker had been “locked out” of the assembly on the day of voting for the chief minister’s election.

The PPP chief said in a tweet: “If it takes 30 seconds to pull off a coup, it should take 30 seconds to undo a coup. Justice delayed is justice denied. After last week’s constitutional breakdown in Islamabad, today Punjab deputy speaker was locked out of [the] assembly on [the] day of voting for CM. Barbered [sic] wire around people’s house.”

The resolution seeking the removal of the deputy speaker was filed by Pakistan Tehreek-i-Insaf and PML-Q lawmakers today morning, the PML-Q spokesperson confirmed. He said the resolution was submitted at the office of the Punjab Assembly’s secretary.

The resolution, a copy of which is available, was addressed to the provincial assembly speaker, PML-Q’s Chaudhry Pervaiz Elahi, who is also a candidate for the chief minister.

In the resolution, the lawmakers said Mazari had lost the confidence of the majority of the house and that provincial assembly proceedings were not being carried out according to the Constitution.

They maintained that in light of the “current situation in the country, he (Mazari) had eradicated democratic norms in the provincial assembly of Punjab”.

“We, the members of PTI and PML, hereby give notice under 53 (7) (c) read with Article 127 of the Constitution under rule 12 of the Rules of Procedure Provincial Assembly of Punjab, 1997 for […] the resolution for removal of the deputy speaker of the Punjab Assembly,” the motion read.

According to rule 12, a no-confidence motion against a speaker or deputy speaker shall be entered into the provincial assembly’s List of Business for the first working day after the expiry of seven days of the receipt of the notice. The rule further says that “no other item shall be included in the List of Business for the day fixed for a motion for leave to move a resolution”.

According to the rule, the votes of at least one-fourth of the total members the house will be required for the tabling of the resolution.

The rule further states that the assembly “should not be adjourned until the motion for leave is disposed of or, if the leave is granted [to move the resolution], the resolution has been voted upon”.

Article 53 (7) (c) of the Constitution also pertains to the removal of a speaker or deputy speaker, stating that “the office of the speaker or deputy speaker shall become vacant if he is removed from the office by a resolution of the assembly, of which not less than seven days’ notice has been given, which is passed by the votes of the majority of the total membership of the assembly.”

Following the submission of the no-confidence motion, the PML-Q spokesperson said Mazari no longer had the authority to call an assembly session.

The notification, a copy of which is available with Dawn.com, read: “In suppression of my earlier order and in exercise of the powers vested in me under rule 15 read with rule 235 of the Rules of Procedures of the Provincial Assembly of Punjab, 1997, I, Parvez Elahi, speaker [of] the provincial assembly of Punjab, hereby withdraw the powers delegated to Mr deputy speaker in terms of rule 25 of the Rules ibid with immediate effect.”

« Ramazan relief package successfully launched (Previous News)
(Next News) Cooperating with autocrats: When is too much, too much? »