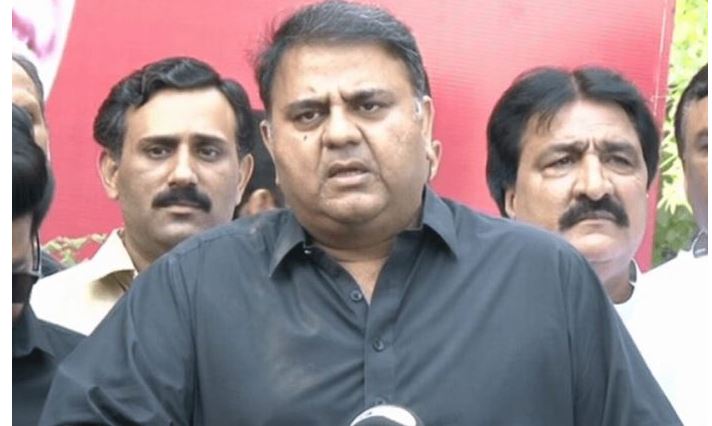 Talking to media here on Monday, Fawad Chaudhry said that Chairman PTI Imran Khan would address public gatherings in major cities across the country to rid the country of the inept and imported government, making life of rank and file a hell.

He said that the Chairman PTI would formally launch the anti-government movement from Karachi on August 19, where the PTI would hold a mammoth power show, adding that Imran Khan would hold public gatherings till December 10 in various parts of the country.

Fawad said that the PTI strongly condemned the police torture on Shahbaz Gill, which was unacceptable.

He said that what was happening to Gill was the height of injustice and the entire party stood with him. He expressed his apprehension that Gill could be kidnapped so as to get his medical certificate from PIMS.

Fawad went on to say that the PTI would take up the issue of Gill’s torture globally.

He expressed his shock over the court’s decision to issue a notice for hearing regarding Gill’s physical remand, as they just wanted this remand to torture him.

Fawad urged that the matter should resolved at the earliest, as Gill was being targeted because he was weak, adding that his case was similar to Nawaz Sharif, Fazlur Rehman and Maryam Safdar.

The PTI said that Rana Sanaullah set a dangerous and new tradition to crackdown against innocent children and helpless women, adding that this was causing irreparable damage to Pakistan’s politics.

Talking about PM’s offer of talk on Charter of economy, Fawad termed the proposal of a charter of economy a foolish idea, as the PTI could not support the destructive economic policy of the government of crooks that brought the country on the verge of economic collapse.

He lashed out at the government flawed policies, which he would trigger tsunami of unemployment while PTI government provided 55 lac jobs.

Fawad revealed that the imported government was trying to put a rift in the judiciary, adding that the people did not forget the era of Rafiq Tarar, as how the judiciary was divided.

He condemned all such efforts and vowed the PTI would foil all such nefarious plans to divide the judiciary.

The PTI leader announced that the PTI would hold judiciary independence day on Monday and Imran Khan would address the address Bar Associations.

Criticizing government for gaging media’s voice, Fawad said that the PTI would hold press freedom day on Thursday to express solidarity with journalists being faced coercion and torture at the hands of the imported government.

He said that the cabal of thieves made life a hell for journalists, as the private TV channel was closed for showing the activities of the PML-N strategic media cell.

Fawad stated that they would raise voice for Arshad Sharif, Khawar Ghaman, Sami Ibrahim and Imran Riaz along with all the people who were suffered due to the inhuman and harsh policies of the current government.

Fawad ruled out talks with the corrupt government; however, he added that the talk could only be held on a framework for early, free and transparent polls, because snap polls was the only solution to steer the country out of the current untold crises.

He said that there was no need of backdoor contacts or closed-door talk, as everything would be in open and public would set the narrative.

However, he made it clear that the government was running away from the elections because they saw the writing on the wall that they would face drubbing at the hands of Imran Khan.

He said that the PTI would not tolerate any further delay because the imported government has already plunged the country into myriad problems. Fawad further said that the government should learn lesson from 1970 instead of conspiring to suppress PTI.

Coming down hard on ECP, he said that the PTI had no trust on the electoral body, which worked as subsidiary of the government.

He demanded that the PPP, PML-N and JUI’s money laundering cases should be brought to the fore and Asif Ali Zardari, Nawaz Sharif and Fazlur Rehman should bring back their money stationed abroad.