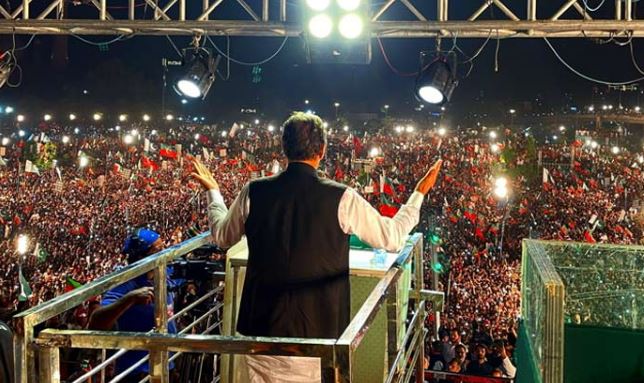 LAHORE – Pakistan Tehreek-e-Insaf (PTI) on Monday changed the venue of August 13 rally and will hold power show in Lahore instead of Islamabad.

Former prime minister and PTI chairman Imran Khan chaired a meeting of the party’s political committee. During the meeting, it was decided that the August 13 rally will be held in Lahore instead of Islamabad.

Sources privy to the development said that the rally will be held in Hockey Ground.

Beginning of the revolution

On Sunday, the PTI chairman in his meeting with party leader and legal expert Dr Babar Awan in Bani Gala said that early election cannot be stopped.

Both the leaders discussed political and legal matters in the meeting. Consultations were held related to the PTI power show on August 13. Babar Awan also apprised the PTI Chairman over ongoing legal issues.

On this occasion, the former premier said with the PTI power show on August 13, there will be beginning of the revolution. The people will not back down from the demand for clean and transparent elections, he said.

Babar Awan said that the defeated group in the political field is running away from the election.Fake cases and false investigations will not become public narrative, he added. Awan went on to claim that now PTI will get two-third majority in the general election.

Meanwhile, the former PM had also announced that he would unveil his plan of action to counter ‘fascism’ at his party’s power show in Islamabad “six days from now” on August 13.

Sharing his thoughts on Twitter, the former prime minister lashed out at the coalition government, saying that a group of thieves have been brought into power through US conspiracy. He penned, “People of Kufa, despite knowing our beloved Prophet (PBUH)’s Grandson was on the path of truth, did not come to help out of fear of Yazid & allowed the greatest tragedy of Islam to happen.”

PTI Chairman also penned, “Every era has its Yazids. Pakistan is facing Yazidiyat (fascism) today in the form of rule by a cabal of crooks and their handlers brought to power through US regime change conspiracy.”

The former premier posed the question and said, Will our ppl bow down before this conspiracy in fear or, as a nation, face up to the challenge? On 13 Aug at our Haqeeqi Azadi jalsa I will announce our plan to counter this fascism.