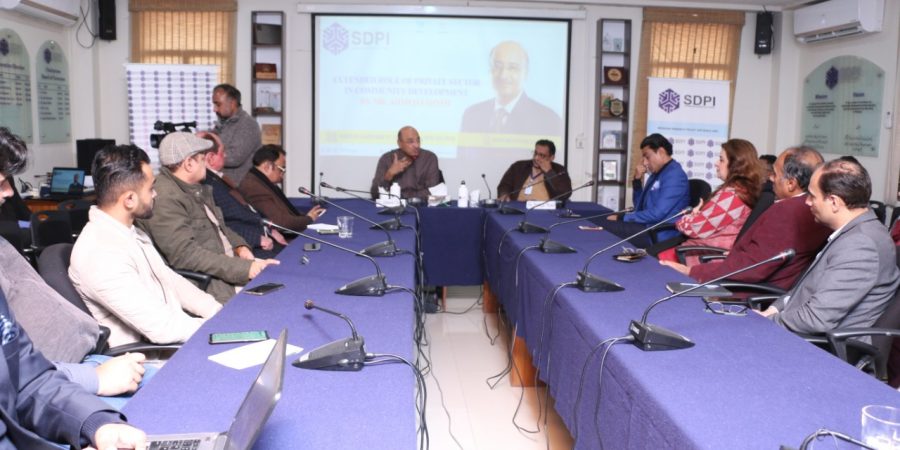 ISLAMABAD, JAN 17 (DNA) – Private sector of Pakistan has a lot of potential to play its due role for well-being of the society. If encouraged and facilitated, the large businesses and the private sector has the potential and willingness to fight poverty significantly through different community development ventures including in health, education.

Chinoy said that no government, particularly in the developing world, can achieve development objectives without the participation and support of the community. He said that community development through philanthropy, charity or corporate social responsibility by the private sector will go a long way to help the government in the social sector.

“Our Memon community, when migrated from India, help resolve their majority issues through establishing their own community-led and community-owned development models”, said Chinoy adding through unity, commitment, trust and enthusiasm the different community groups able to establish model schools, health centers, where, without any discrimination based on creed, class or religion, everyone treated equally. Moreover, many other social work, services and initiatives such as marriages (Shadi-Madad), funerals, and housing etc., are being taken care of by these community development groups, he added.

Chinoy said it is unfortunate that the government failed to provide the education, health and other social services and facilities to the communities which push the people to come forward and help resolve their issues on their own. Lack of trust in the government is the major factor that the private sector is doing their own on community development work, which needs to be bridged for collective efforts to tackle the societal challenges, he added.

While describing the poor public service delivery of the government, Chinoy said that there are only 3882 government schools in 938 premises and only 4 general hospitals in Karachi, which has 18 districts and nearly 2 crore population. He said that the government schools in Karachi have the capacity to enroll around 5 lac students, whereas, only 2 lac and 35 thousand students are enrolled. This shows the level of governance, capacity and public service delivery by the government, he lamented.

On performance and importance of the community development initiatives led by the private sector in Karachi, Chinoy said that his community adopted 2 schools in every 18 districts and transformed to model schools through teachers training, curriculum development and incentivizing students, which resulted in significant increase of enrollments by 4 times. In the health sector, he said that his community establish more than 50 health facilities around Karachi including the Indus hospital, which is now being developed as a network of 14 Indus hospitals around the country and providing health services without discrimination.

While clarifying on terror financing through philanthropy or charity, Chinoy said that there is not a single penny goes to terror financing as their community development model is very transparent and has the mechanism of accountability, which can be monitored or checked.

To a question on regulating the philanthropy, Chinoy said that the government cannot not and should not regulate the philanthropic work, as there is a lot of trust deficit. However, the government should partner with the communities and allow community participation for inclusive decision making and well-being of the society. He urged the need for raising awareness on the community development models in the whole country, especially in the rural areas, to help resolve the societal issues.=DNA