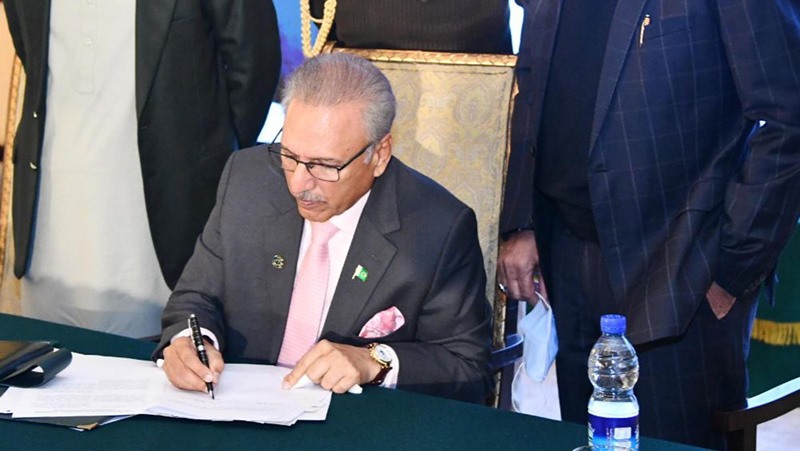 ISLAMABAD , DEC 02 : President Arif Alvi has signed the electoral reforms bill into law to allow the use of electronic voting machines (EVMs) in elections.

The government held a ceremony for the signing of the bill to make it a point. The president on Wednesday signed 31 of the 33 bills passed at the joint Parliament session, but the bills on EVMs and I-Voting were left out.

After signing the bill, President Alvi said EVMs will put an end to the tradition of rigging allegations.

He congratulated Prime Minister Imran Khan for his efforts to get the bill passed from the Parliament.

“Pakistan will grow when a common man embraces technology,” the president said.

Federal Science Minister Shibli Faraz said the government and the election commission of Pakistan (ECP) got sufficient time before the next general elections to prepare for the use of EVMs.

He said election disputes in the past had affected the political system of the country.

Faraz said EVMs were in line with the recommendations from the ECP.

Meanwhile, Federal Information Minister Fawad Chauhdry has said that the EVMs would be used in the local government polls in Punjab before the next general elections.

Speaking with journalists in Islamabad, he said the provincial government had already amended the law and the government would assist the ECP with the use of EVMs.

Chaudhry said the use of EVMs for holding general elections was not going to increase election costs. In future the EVMs would make the electoral process less expensive, he said.

The federal minister said if the ECP holds the general elections using EVMs the government will release as much money as required.

A day earlier, Chaudhry had said that the government could stop the release of funds to ECP if it refused to use EVMs.

« Local bodies elections to be held through EVMs: Fawad (Previous News)
(Next News) No compromise on corruption; PM tells PAC »