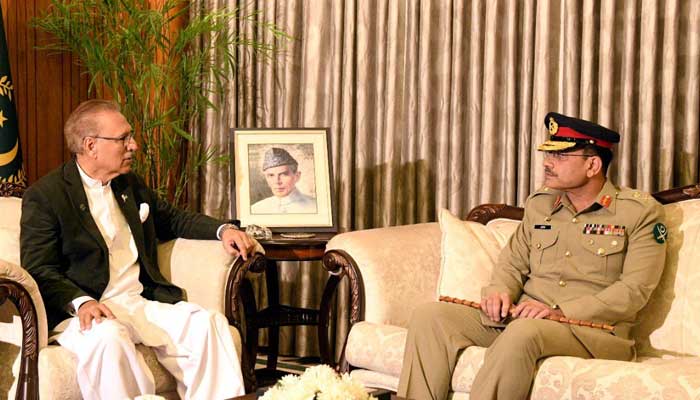 In an interview with a private news channel, President Alvi praised the army chief and his viewpoints. “The matter [appointment of army chief] has been settled nicely for the next three years,” he said, maintaining that the COAS appointment was done on merit.

Commenting on his meeting with Pakistan Tehreek-e-Insaf (PTI) Chairman Imran Khan ahead of the crucial military appointment, the president said that the former prime minister was informed about being consulted after the summary is received, therefore, he added that the consultations were held accordingly.

The president, however, said that he should avoid commenting on the army chief’s appointment as this is the right of parliament.

Gen Munir was handed over the command of the military by General (retd) Qamar Javed Bajwa in a ceremony held at the General Headquarters in Rawalpindi on November 29.

Regarding Imran Khan’s remarks on former chief of army staff (COAS) General Qamar Javed Bajwa, President Alvi said: “Khan’s comments on ex-COAS Gen Bajwa’s double-game would be based on his own experience.”

Last week, for the first time since spending three-and-a-half years with ex-army chief Gen Bajwa, the PTI chief said: “Giving an extension to him [Gen Bajwa] was my biggest mistake.”

“I would trust whatever General Bajwa said. I would tell him that both of us are [thinking about] the country; our purpose is one — to save the country,” Khan had said.

The former prime minister added that he didn’t know how he was being lied to and betrayed.

Shedding light on the ongoing debate between the PTI and the coalition government, the president said Finance Minister Ishaq Dar has the talent to reconcile things.

“During the PTI’s sit-in [back in 2014] Dar tried to make things better,” he said, revealing that during his meeting with the financial czar today he was apprised about the economic situation.

Earlier, sources told Geo News that Dar has sought President Alvi’s help in winning over the PTI for the implementation of the International Monetary Fund (IMF) programme.

The sources also said that the finance minister requested the president for the PTI’s cooperation in bringing political stability to the country and the implementation of Pakistan’s agreement with the IMF.

Meanwhile, President Alvi reiterated Dar’s stance that Pakistan will not default. “I gave a proposal to Dar regarding energy conservation. Markets should be closed earlier in order to save three-four thousand megawatts of electricity.”

The coalition government and the PTI should sit down and hold talks about the general elections, the president added.

Qureshi revealed that the PTI wants to form new governments in the two provinces before Ramadan.

As per reports, the incumbent government and the opposition have been holding talks regarding the date of general elections as the PTI has been constantly piling up pressure on the government to conduct snap polls.

« Putin acknowledges Russia’s war in Ukraine could be a long one (Previous News)
(Next News) Ethiopia adheres to equitable and reasonable utilization of transboundary water: Envoy »