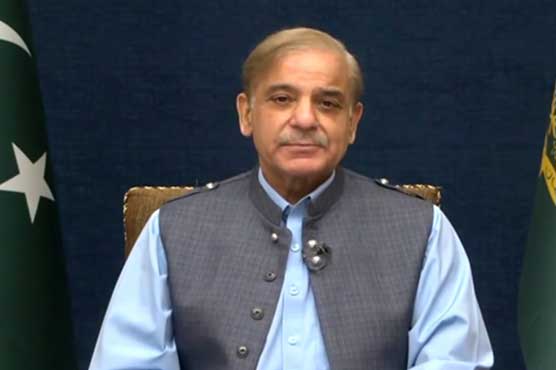 Blames Imran Khan for all woes; promises a bright future; announces to mend fences with friends; declares Indian decision on occupied Kashmir stumbling block in the way of normal ties

ISLAMABAD: Prime Minister Shehbaz Sharif has announced a hefty package of 80 billion rupees for the needy people. He said this amount shall be distributed thru BISP. He also announced to reduce flour prices.

Surprisingly the Prime Minister did not mention anything about the tenure of the government. There were reports that he will announce that his government will complete its tenure, however he did not mention this in his speech.

Prime Minister Shehbaz Sharif said he is thankful to Allah Almighty and the people of Pakistan for the position he is in today.
He said he is privileged by having trust and support of all the coalition partners.
The Prime Minister said that we found Pakistan on the verge of bankruptcy and disaster, yet we have vowed to turn the tides. He said all the coalition partners are working hard to put Pakistan back on the road to success.
Turning guns at former Prime Minister Imran Khan, he said that former government leaders are dividing the nation and indulging in hate politics. Refuting Khan’s claims of “US backed conspiracy”, Sharif said that Imran Khan planted this story to make people forget his failures. He said National Security Policy as well as the relevant ambassador has rejected the claims of foreign conspiracy. The Prime Minister said that Imran Khan is damaging Pakistan’s foreign policy and relations with friendly countries. Sharif pledged to show the failures of the previous government to the public. He said the tough IMF deal was reached by the previous government. He laid the blame of current inflation upon Imran Khan’s government. The Prime Minister said that despite all the claims, Khan has put the country in a debt trap.
Shehbaz Sharif said that the tales of previous government’s incompetency are shocking. “With heavy heart, we had to increase the prices of petroleum products”, he said. He put the blame on the PTI led government for subsidizing the petroleum products at a crucial time when prices in the international market were rising. He announced a new relief package worth Rs 28 Billion monthly for lower segments of society. He said the government is poised to lessen the burden of inflation from people.

On foreign policy, Shehbaz Sharif said we are continuing our efforts to resume good relations with brotherly and friendly countries. He called upon India to put a halt to atrocities in IIOJK.