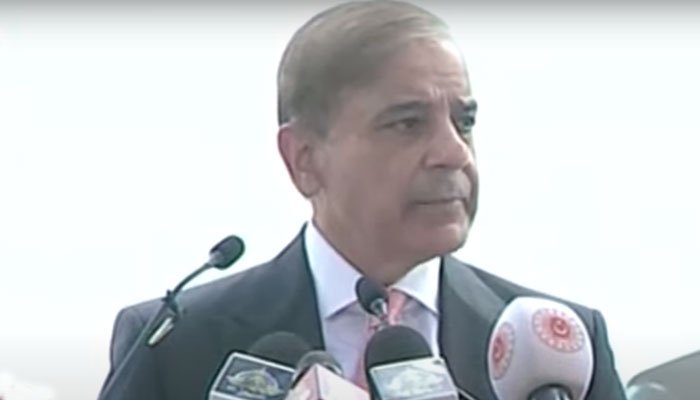 KARACHI: Prime Minister Shehbaz Sharif is addressing a ceremony at Karachi Shipyard and Engineering Works in the financial capital of Sindh during his one-day trip to the city.

It had been reported that the premier plans to meet the business community to take suggestions regarding the economic challenges facing the country.

After attending the ceremony, PM Shehbaz will visit CM House, where he will preside over a meeting on the law and order situation in Karachi. He will also meet prominent businessmen at CM House.

Sources say the premier will leave for Lahore tonight to appear before the Federal Investigation Agency (FIA) in court for a money laundering case.

Expressing his honour, the premier said that the movement to take Pakistan-Turkey relations to new heights has begun. “Pakistanis and Turks are one nation living in two different countries,” he said, adding that the construction of ships during the period of coronavirus is a great achievement for both the countries.

“Turkey will soon play a major role in Pakistan’s development and prosperity,” the premier said, highlighting that Turkey has always been a staunch supporter of Pakistan during natural disasters.

Regarding the China-Pakistan Economic Corridor (CPEC), PM Shehbaz said that the CPEC project is “very important” for the development of regional ties.

The ships being inaugurated today were built under an agreement between the Ministry of Defense Production and Turkey.

Two corvettes’ ships are being built in Pakistan while two will be built in Turkey. These four corvettes are currently in various stages of completion.

According to reports, the addition of these ships will enhance the military and operational capabilities of the Pakistan Navy.