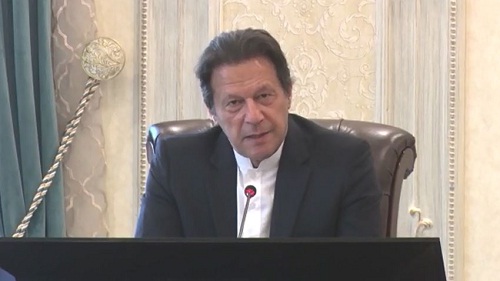 Islamabad : Prime Minister Imran Khan has hoped for active collaboration amongst the Muslim countries both at the government level and through interaction amongst the scholars and academia to promote the true teachings of Hazrat Mohammad Rasool Allah Khatam-un-Nabiyeen Sallallaho Alaihe Wa Ala Alayhee Wa Ashabehi Wassalam.

Interacting with the envoys of Muslim countries on the establishment of Rehmatul-lil-Alameen, in Islamabad, he termed it imperative that the life and teachings of the Hazrat Mohammad Rasool Allah Khatam-un-Nabiyeen Sallallaho Alaihe Wa Ala Alayhee Wa Ashabehi Wassalam are fully understood to achieve real social welfare and progress.

He said Hazrat Mohammad Rasool Allah Khatam-un-Nabiyeen Sallallaho Alaihe Wa Ala Alayhee Wa Ashabehi Wassalam is a blessing for all humanity. He underscored the appeal of Islam’s universal message and the bounties of following the fundamental precepts of Riasat-e-Madina including in particular, the principles of justice, rule of law, welfare of the people and an unswerving focus on the acquisition of knowledge.

Imran Khan said the prime objective of establishing Rehmatul-lil-Alameen Authority is to develop a deeper understanding of the Sunnah through collaborative research and to provide essential tools to the youth to preserve their Islamic identity, values and culture in the face of diverse social and digital media influences.

He said the authority is mandated to coordinate with the Islamic scholars around the globe to discuss contemporary issues faced by the Muslim Youth and to present a coherent and logical intellectual response to modern challenges in particular Islamophobia.

The Prime Minister laid emphasis on teaching ethics in schools in order to help build character of Muslim youth, in accordance with the principles and true spirit of Islam. In this regard, he highlighted the importance of the role of print, digital and electronic media and the influence of their content on the lifestyle and personality development of the young generation.