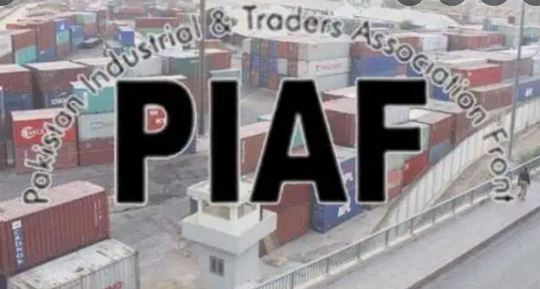 ISLAMABAD: /DNA/ – The Pakistan Industrial and Traders Associations Front (PIAF) on Saturday said the rupee witnessed volatile trend in the process of trading against dollar and other major currencies.

PIAF Senior Vice Chairman Nasir Hameed and Vice Chairman Javed Siddiqi, in a joint statement issued here said that massive fall of rupee value continued to damage the economy, as the rupee witnessed a huge depreciation against the greenback.

Nasir Hameed observed that besides increasing exports and controlling imports the government will have to take administrative measures, as a large demand of cash dollars are seen in the market.

He said that there was a complete breakdown of economic policymaking, as the country’s fiscal policy had become subservient to monetary and exchange rate policies.

He said that the US dollar continued to rise against the rupee, reaching a record high in interbank trade amidst growing current account deficit. “The government needs to devise a strategy on war-footing to increase foreign investment in Pakistan so as to stop the upward trajectory of the dollar,” he added.

Javed Siddique urged the government to control volatility of rupee against the US dollar, as the industrial revival and economic growth is not possible without stability of local currency. He said that the massive devaluation of currency fuelled inflationary pressures, adding that two major factors contributed to the price hike. “First, the prices of food and commodities as well as fuel prices skyrocketed in the international market, and second, the depreciation of the exchange rate by 30 percent also led to higher inflation,” he added.

It is to be noted that after four straight days of losing value, Pakistan rupee reversed its trajectory and registered a marginal gain against the US dollar, appreciating 0.14% in the inter-bank market on the weekend.

As per the State Bank of Pakistan (SBP), the rupee closed at 186.70 after a day-on-day appreciation of 27 paisas, or 0.14%. However, the currency has still lost 2.76% of its value this week.  The local currency has depreciated over 17% against the dollar since achieving its most-recent high on May 14, 2021, and by over 14% during the ongoing fiscal year. Oil prices, a major determinant of currency parity, also slipped burdened by the prospect of weaker global growth, higher interest rate and COVID-19 lockdowns in China hurting demand even as the European Union considered a ban on Russian oil that would further tighten supply.

They said that rupee has been under pressure over the International Monetary Fund (IMF) programme, seen widely as crucial to bringing stability to Pakistan’s markets. Pakistan is currently in talks with the IMF for revival of its $6-billion Extended Fund Facility (EFF), a programme that was put on hold with the change in government.

They hope that the meeting with the IMF brings positive news, as oil prices are too high, and there is pressure on the balance of payments.