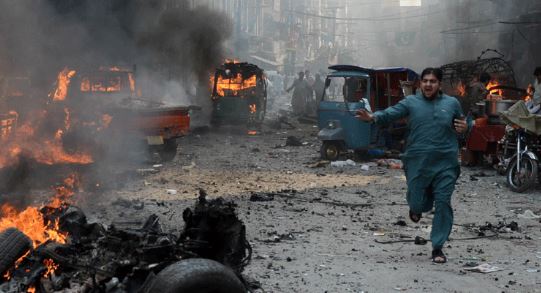 Pall of gloom still hovers over Peshawar on the 3rd day of a tragic blast in which many precious lives were lost. While the government claims to have tightened noose around the perpetrators, the incident seeks to put question marks on the government’s ability to check such incidents in future. The timing of course was awkward from Pakistan point of view as the Australian cricket team was in Pakistan and the blast appeared to be a dime a dozen attempt to scare the guest team. Hats off to the Australian team who remained undeterred and decided to continue the Pakistan tour.

Meanwhile people from all walks of life continue to express solidarity with the families of the victims. The diplomatic community is also greatly perturbed by this gruesome incident. Ambassadors and high commissioners of various countries have already extended condolences. Similarly the business community also extended its support to the affected families. The Peshawar business community expressed solidarity with the blast victims and bereaved families as on the third day of Kocha Risaldar tragedy, the atmosphere of the city was mournful, shops of the markets and surrounding areas were closed.

The mourning procession at the homes of martyrs in Peshawar were held with relatives and locals continue to arrive for prayers.The business community expressed solidarity with bereaved families and visited each of the victim’s homes for Fateha.The city’s historical storytelling and Kohati’s bazar is closed for the third day on Sunday.

The death toll increased to 63 on Sunday with 37 injured are under treatment and more than five injured were in critical conduction. The federal government and provincial governments have claimed to trace and identified the suicide bomber and other suspects and facilitators. Nevertheless, people want immediate punishment for those involved in this incident. Unfortunately it happens that people as well as the government officials forget about the incident after a few days. The culprits too are never brought to justice due to which such incidents continue to take place.

The Prime Minister soon after the incident summoned the interior minister and asked him to do more in terms of enforcement of law and order in the country. Pakistan has already suffered a lot in war against terror and because of sectarian violence. While the country is already passing through difficult times with regard to economic growth and political stability, such incidents would only add to our woes.