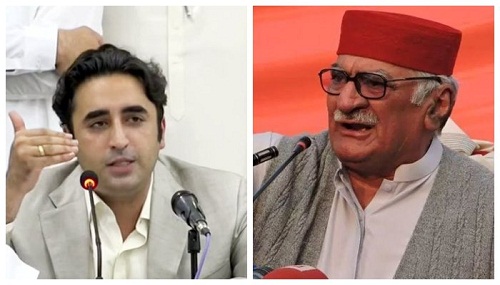 A day earlier, leaders of the remaining eight PDM parties held a meeting after which the alliance announced it had rejected the government’s “unilateral electoral reforms” and vowed to hold fresh protests across Pakistan.

Political observers and analysts are keeping a close eye on Bhutto’s meeting with the ANP leadership, as it comes after PML-N President Shahbaz Sharif’s release and subsequent efforts to bring about a reconciliation between the PPP, ANP and the PDM.

After the meeting takes place, leaders of the two parties will hold a joint press conference.

‘Will not waste time over’ PPP, ANP: Fazl

PDM President Maulana Fazlur Rehman, responding to a question, said during a press conference on Saturday that the PPP and ANP were not discussed during the alliance’s meeting.

He said the PDM did not discuss the two parties as they are no longer a part of the alliance.

“They can still contact the PDM leadership and apprise them about their intentions. But it is not something that we will waste time over anymore during PDM meetings,” he had said.

Meanwhile, taking over the presser, PML-N Vice-President Maryam Nawaz had said her father, Nawaz Sharif, had taken the same position as the JUI-F chief.

Fazl said the PDM has decided to begin legal proceedings against the PTI-led government’s “unlawful acts”, for which, a legal team will be formed, with PML-N’s Azam Nazeer Tarar as its convener and JUI-F’s Kamran Murtaza as the co-convener.

He had said the alliance had decided a future course of action, and on July 4, a massive anti-government protest will be held in Swat, followed by another one in Karachi on July 29.

Thereafter, on the occasion of August 14, independence day, a massive protest will be held in Islamabad, with PDM showing solidarity to Kashmiris and Palestinians.

PML-N will also host a budget seminar soon to form a unified strategy during the government’s budget session in the parliament, while the task to hold the event has been given to Shahbaz Sharif, the JUI-F chief said.