Palestine an issue of the entire Muslim world: Iranian envoy 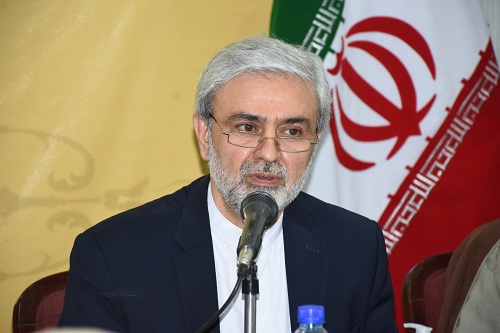 Says Imam Khomeini’s view on Islamic Unity need of hour;Islamophobia that Muslims are now facing, the burning of the Holy Quran, the disrespect to the Holy Prophet (PBUH) are all common threats that all Muslims have a common duty to confront

ISLAMABAD: Syed Muhammad Ali Hussaini Ambassador of the Islamic Republic of Iran to Pakistan has said  Imam Khomeini’s emphasis on unity of Muslims arose from his religious beliefs, the Qur’an and the Sunnah of Prophet Mohammad (PBUH) adding that Muslims today can undermine common challenges through unity.

Mohammad Ali Hosseini made the remarks at a conference to mark 32nd anniversary of the demise of the great founder of Islamic Revolution entitled “Imam Khomeini and the unity of Islamic Ummah” organized by Iranian Cultural Consulate at Khana-e-Farhang in Rawalpindi.

He added Imam Khomeini emphasis on unity of Muslims arose from his religious beliefs, the Qur’an and the Sunnah of Holy Prophet Mohammad (PBUH).

Hosseini stated Imam Khomeini did not pursue unity and rapprochement only intellectually and theoretically, but invited scholars from other Muslim countries to achieve this objective practically. He added the issue of Palestine was one of the prominent symbols of Imam Khomeini’s practical action towards unity.

The envoy went on to say the issue of Palestine was a matter for the Islamic world, and the late Imam raised it at the beginning of his uprising, calling on all Muslims to support the Palestinian people and to acquit the terrorist regime of Israel and to strive for the liberation of the entire holy land of Palestine.

The Iranian ambassador added the declaration of Quds Day by Imam Khomeini was a practical action arising from his belief in unity and rapprochement between Islamic religions. Imam Khomeini’s annual messages on the occasion of Hajj were based on the same belief.

He said after the death of Imam Khomeini his approach was continued by Supreme Leader Ayatollah Khamenei through unity diplomacy.

The Iranian ambassador to Pakistan added the Islamophobia that Muslims are now facing, the burning of the Holy Quran, the disrespect to the Holy Prophet (PBUH) are all common threats that all Muslims have a common duty to confront.

He stressed unity diplomacy should be seriously pursued not only by diplomats and political officials but also by scholars of Islamic sects and Muslims.

Hosseini said in the discussion of Palestine and resistance against the Zionists, groups of several thousand people managed to bring down the Zionist regime as the fourth largest army in the world, and this is because of the unity that was achieved between them because they stood up for the rights of Shiites and Sunnis.

He said if the diplomacy of unity continues and follows the ideas of Imam Khomeini, surely the unity of Muslims and Islamic governments will create a power to confront arrogant powers of the world.

**Unity of Islamic sets most important achievements of Imam Khomeini

Mr. Ehsan Khazaei, The Cultural Counselor of the Iranian Embassy in his views said Imam Khomeini was the supporter of oppressed and all Muslims and always called on the people to unite.

He emphasized the valuable role of Imam Khomeini in creating unity between Islamic sects is not hidden from anyone.

Khazaei added highlighting commonalities can prevent the divisive movement of enemies against Muslims, so all religious scholars and Muslim thinkers should rely on this issue and thwart arrogant plans.

Pakistani thinkers also emphasized in their speeches that the way to save the Islamic Ummah from the conspiracy of global arrogance is following the teachings of Imam Khomeini.