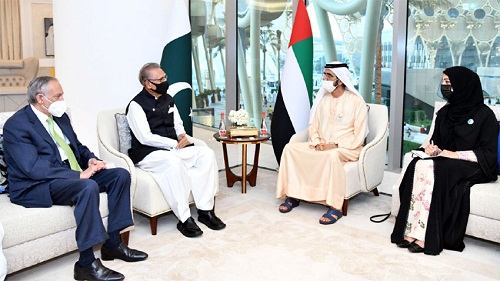 In a meeting held at Leaders Pavllion of Dubai Expo 2020, the two leaders reaffirmed to strengthen the existing close fraternal relations between Pakistan and the UAE in diverse fields.

The President and UAE Prime Minister also reviewed prospects of growing bilateral relations on all fronts while discussing a number of regional and international issues of interest.

Speaking on the occasion, Dr Arif Alvi underlined that the Expo 2020 was a landmark event not only for the UAE, but also for the whole region.

The President also apprised the UAE Prime Minister about continued and blatant violations of fundamental human rights of the Kashmiri people by occupying Indian forces in Indian Illegally Occupied Jammu and Kashmir.

Speaking at a dinner hosted in his honour by the Pakistani-origin businessmen in the United Arab Emirates, the President said that the immense potential of Pakistan’s tourism sector could lead to sustainable development and prove as a major source of revenue for the country.

He said it is time for Pakistan to emerge on the global tourism map as a preferred tourist destination.