Pakistan to continue to stand with Azerbaijan through its times of need: Sanjrani 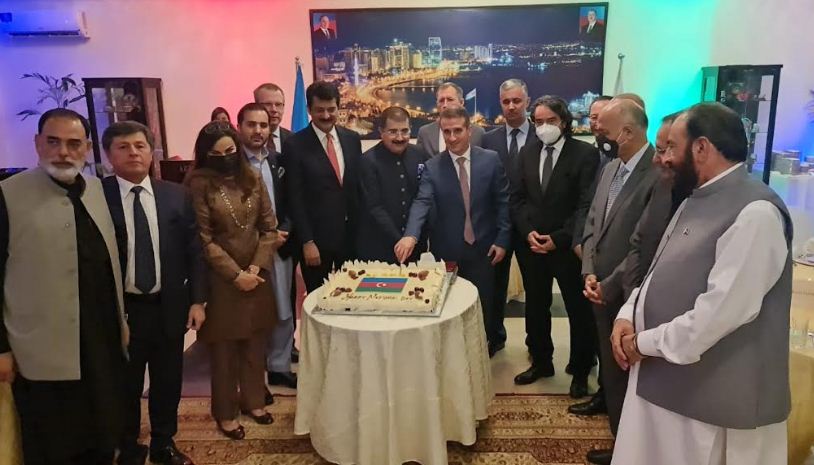 Islamabad, MAY 26 – Chairman Senate Sadiq Sanjrani has underscored the need for a robust action plan to enhance trade and investment opportunities between Pakistan and Azerbaijan. The Chairman Senate expressed these views at reception held in connection with national day of Azerbaijan.

He also emphasized the need for making more efforts in order to boost the bilateral trade as it does not commensurate with close political ties between both the countries. Pakistan and Azerbaijan have great expertise to share and trade in the fields of energy, defense, agriculture, natural resources, science and culture, there is need to adopt a robust Action plan for enhancing trade and investment opportunities.

He further said that ties between the two countries are based on historical cultural bonds, mutual respect and trust. He also extended his good wishes to the leadership, government parliament and people of Azerbaijan on their National Day.

He expressed satisfaction that there is tremendous goodwill for each other at the leadership and official level which is also manifested in the people to-people contact.

The Chairman Senate said that Pakistan was one of the first countries to recognize the independence of the Republic of Azerbaijan. The two countries have since exchanged great support on critical issues through the respective political leadership.

“It is an honor and a privilege to be present here on the momentous occasion of the National Day of Azerbaijan” said Chairman Senate.

Chairman Senate observed that both Pakistan and Azerbaijan believe in peace and development therefore consider regional growth and prosperity a shared agenda. He said that regional connectivity is important for promoting socio-economic growth and both sides must prioritize linkages to boost trade and economic cooperation.

He said that geographical location enhances significance of both the countries in the region and both can become hub of economic activity.