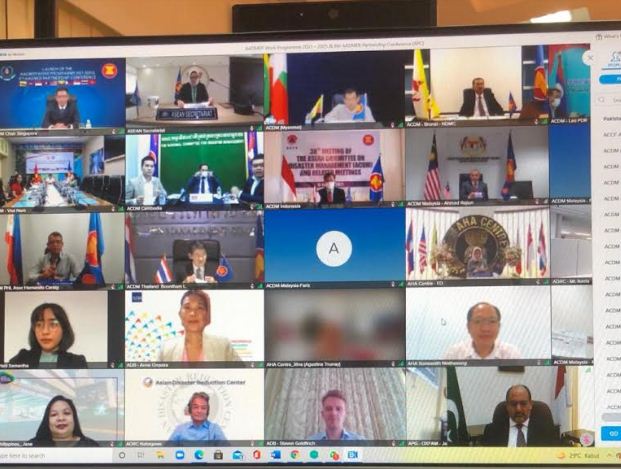 JAKARTA: Speaking at the launching ceremony of the Association of East Asian Nations (ASEAN)’s Disaster Management and Emergency Work Program for the year 2021-25, Ambassador of Pakistan to ASEAN, pledged Pakistan’s full support to ASEAN’s disaster and risk management efforts.

The meeting was attended by the representatives of all ASEAN member states and its development partners. Pakistan is a Sectoral Dialogue Partner of ASEAN. In this capacity, Pakistan partners with ASEAN in many programmes of the Organization including those related to climate change and risk management. Pakistan’s Ambassador to ASEAN, based in Jakarta is also concurrent.

During his speech, Ambassador Muhammad Hassan stated that Pakistan would be happy to support the initiatives and the priority programmes, especially those related to disaster risk reduction and climate change adaption.

Pakistan believes that in any disaster, regional and international partnerships are important in building resilience amongst partner states and preparing communities to effectively respond to disasters through further stakeholder coordination.

The Ambassador further stated that climate change phenomena are amplifying the risk of extreme weather disasters. It also poses significant risks to vulnerable groups, especially the poor, in both rural and urban areas all over the world including Pakistan and ASEAN. Pakistan’s climate change concerns included unusual rain patterns especially during monsoons, the likely impact of receding Himalayan glaciers on the Indus River system, decreased capacity of water reservoirs, reduced hydropower during drought years, and extreme events including, floods and droughts. Government of Pakistan was looking at ways to urgently addressing it. One successful initiative taken by the government was restoration of ecosystem by planting Ten Billion Trees Tsunami, which has been acknowledged by UNEP.

Ambassador Hassan proposed cooperation between NDMA of Pakistan and disaster management agencies of ASEAN through information sharing, early warning, surveillance, joint training, and common standards and protocols required for regional cooperation. He said that NDMA had the mandate to manage complete spectrum of disasters by adopting a disaster risk reduction perspective in development planning at all levels, and through enhancing institutional capacities for disaster preparedness, response and recovery. The agency already had cooperation agreement with a number of partner organizations in friendly countries. It was also ready to share its experiences with ASEAN partners.