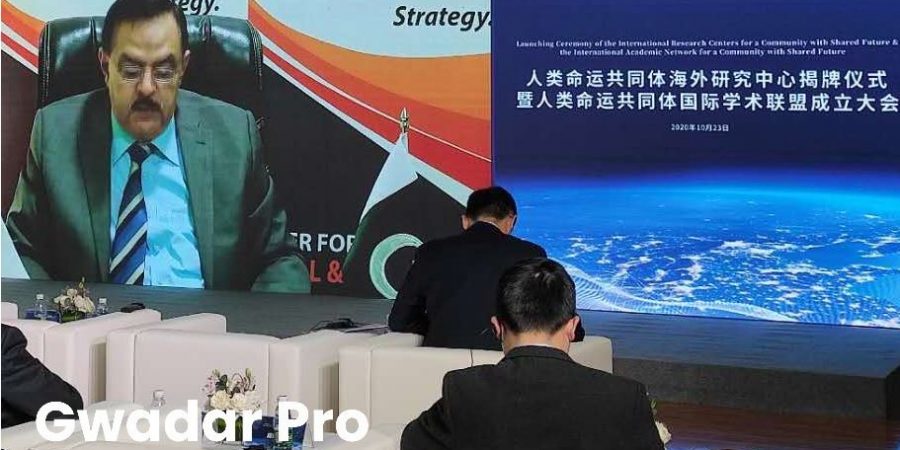 BEIJING, Oct. 25 (DNA): Pakistan Research Center for a ‘Community with Shared Future’ has been established here in Communication University of China (CUC) in collaboration with Global & Strategic Studies (CGSS), Islamabad.

According to Gwadar Pro, addressing the opening ceremony Deputy Head Mission, Pakistan Embassy Beijing, Ahmed Farooq said the relationship between Pakistan and China is based on the principle of a shared future for humanity, several decades ago, with time, its future is far brighter than its glorious past all because it is based on principles.

The Center, he said to offer an opportunity to exchange ideas and to create better ways as how to collaborate with each other.

Farooq added, this is very important that we remain engaged with each other and understand each other and it’s not just one country it’s a combination, and a collection of so many other countries coming together for such exchange of ideas, how we can better cooperate with each other for the benefit of all of us.

President of the Communication University of China, Liao Xiangzhong stated on the occasion that every institute should pursue innovation, research, development, international exchange, and collaboration for the promotion of international education and the betterment of mankind.

“We hope we can further promote peace development and civilization dialogue. We should have that responsibility to spread knowledge and pursuing a higher goal. So, we should have a broader mind and high envision in front of the challenges and recession” he said.

Lieutenant Colonel Khalid Taimur Akram (Retd) has the honor of being appointed as the first Director of Pakistan Research Center for a Community with Shared Future.

In an interview with China Economic Net, Taimur Akram said that It is indeed a great honor for CGSS and himself  to be the partner organization of the Research Center in Pakistan and being given the chance to collaborate for the promotion of a community with a shared future.

“As we all are aware that Research at the global level is becoming increasingly collaborative and problem-oriented. This transition is not only taking place at the global level but at regional and national levels as well. Hence, leading to more inclusive and accountable research which will be instrumental in highlighting issues that need immediate attention” he stated.

Khalid hoped that through this initiative, they will contribute to the promotion of the academic and cultural resource exchange between Pakistan, China, and other member states.

“I look forward to strengthening the academic relations between Pakistan, China, and the rest of the world. Along with his colleagues from the CommunicationUniversity of China and the rest of the member states, he will try to establish a network of academic collaborations. Hence, working collectively towards making the world a progressive and prosperous place”, he added.

It is worth-mentioning that CUC is establishing Research Centers in collaboration with seven countries including Pakistan, Germany, South Korea, Malaysia, Ethiopia, and Tanzania.

These Centers are designed as a joint academic platform to co-build networks in both China and the partner country to facilitate cooperative projects.