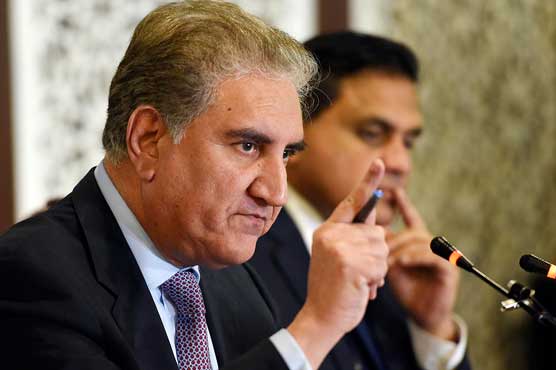 He maintained that Pakistan has no objection to holding bilateral talks with India; however any mediator facilitating the process of dialogue would be welcomed.

The minister added that Pakistan has never refuted dialogue, but India has not been showing any sign of it.

For holding bilateral talks, he put conditions, including revoking of curfew, restoration of basic human rights, release of all those arbitrarily detained (Hurriyat leadership) and his meeting with the Kashmiris’ leadership.

Addressing separately at a rally at Umer Kot, Qureshi said Muslims in Kashmir were denied religious freedom on the occasion of Eid. The minister said Modi can’t stand in Srinagar but he is standing in front of Hindus in Pakistan.

He said the elected representatives in India were not allowed to enter Occupied Kashmir. He said today’s India is negating philosophy of its founding fathers Gandhi and Nehru and RSS philosophy is dominating.

He said the Kashmir dispute would be discussed at European Parliament on September 2 and UNSC is discussing the matter after 54 years.

Earlier today, while talking to a private news channel, Qureshi said that announcement of US House Committee on Foreign Affairs to discuss prevailing situation in Occupied Kashmir was ‘a major development.’

He said the meeting of the US House Committee on Foreign Affairs would prove to be quite useful regarding Kashmir dispute.

The minister said that overseas Pakistanis particularly the Pak-American community played a key role to internationalise the issue.

Qureshi said we were highlighting the Kashmir issue across the globe and it was the reason that issue is being discussed at every forum.

He said Prime Minister Imran Khan would forcefully raise the Kashmir issue during his speech at the UN General Assembly session.=DNA

NEW YORK, AUG 31 (DNA): Pakistan’s Permanent Representative to the United Nations Maleeha Lodhi has said the UN Security Council has an obligation to resolve the decades-old Kashmir problem by implementing its own resolutions that pledged the right of self-determination to the Kashmiri people to decide their destiny.

She said the whole world subscribes to the principle of self-determination and why should it be denied to the people of Jammu and Kashmir and, what we ask, are they denied because they are Muslims.

Maleeha Lodhi urged the international community that it should respond to the fast deteriorating situation in occupied Kashmir because it poses a danger to peace and security of the South Asian region.

She said that Pakistan believes it also endangered international peace and that the 15-member Council should live up to its responsibility. She called India’s decision to revoke Kashmir’s special status as illegal and illegitimate.

She said Security Council acknowledges the fact that it is an international dispute when the 15-member body met recently.

She said there is a communication blackout, people cannot communicate with anybody, telephone lines are not working, the Internet has been suspended, people are not allowed to go out and pray.

Maleeha Lodhi said over 700,000 Indian troops have been deployed and an additional number of troops have also been sent to the valley.

She said that an occupying power is using all instruments of repression, to subdue the people of Jammu and Kashmir and yet we also know from reports that we are receiving, and these are international media outlets receiving these reports, that over 500 protest demonstrations have already been held in the last 3 to 4 weeks, so people are resisting the kind of state terrorism that has been inflicted upon them.

She said Pakistan has raised the grave situation with UN Secretary-General Antonio Guterres and at the Security Council.

About US President Donald Trump’s statement that India and Pakistan can solve Kashmir problem on their own, the Pakistani envoy said that New Delhi had suspended the bilateral dialogue over three years ago.

She said that India refuses to talk to Pakistan and in any case, the bilateral track never limited Pakistan from raising the issue internationally because it is an international dispute and the Security Council has an obligation.”=DNA