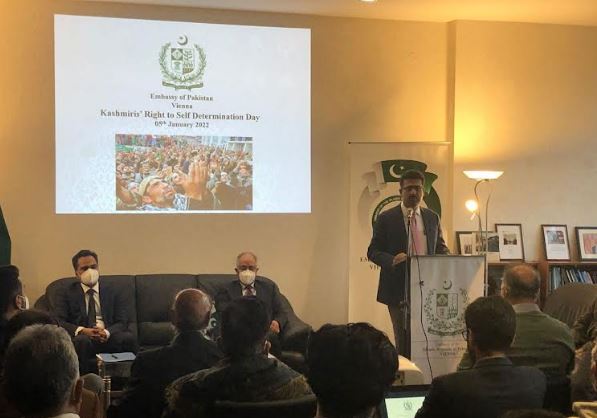 Vienna, Jan 7: Today, the Embassy of Pakistan in Vienna, Austria, organized an event to mark the Kashmiris’ right to Self-Determination Day.
The event at the Embassy was attended by the members of Pakistani and Kashmiri community in Austria and media persons. Messages of the President, the Prime Minister and the Foreign Minister of Pakistan, issued on the occasion, were read out.
In his remarks, Ambassador Aftab Ahmad Khokher recalled that the right to self-determination was enshrined in all major international human rights instruments including the UN Charter. He said that the denial of this right and subjugation of Kashmiris in Indian Illegally Occupied Jammu and Kashmir (IIOJK) was a gross negation of human dignity. He highlighted the Indian atrocities inflicted on the people of IIOJK over the course of seven decades which had become even more intense under the RSS-BJP regime driven by the fascist Hindutva ideology. He also condemned India’s illegal and unilateral actions of 5th August 2019 which had been followed by an unprecedented military siege and restrictions on fundamental rights and freedoms of the Kashmiri people. While paying homage to the sacrifices of the people of IIOJK, he reaffirmed Pakistan’s resolute support to them in their struggle for the realization of their inalienable right to self-determination.
Ambassador Khokher also called upon the international community to fulfill its role for the implementation of relevant UNSC resolutions on Jammu and Kashmir for durable peace and stability in South Asia.
Each year, Kashmiris around the world observe 5th January as the Right to Self-Determination Day. On 5th January 1949, the United Nations Commission on India and Pakistan had adopted a resolution guaranteeing the Kashmiri people the right to self-determination through a free and impartial plebiscite in Jammu and Kashmir under the UN auspices.