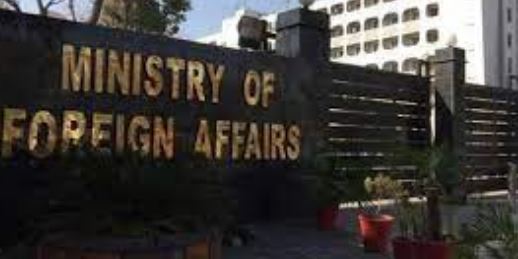 ISLAMABAD, APR 11: Pakistan strongly condemned the Indian occupation forces’ unrelenting killing spree in the IIOJK and the despicable attacks on Muslim worshippers during the holy month of Ramadan* Pakistan strongly condemns Indian occupation forces’ relentless killing spree resulting in martyrdom of two more Kashmiri youth in Srinagar during a staged cordon and search operation on 10 April 2022. More than 560 innocent Kashmiris have been martyred by the occupation forces in staged encounters since, the Indian illegal and unilateral actions of 5 August 2019. The intensified military crackdown and the rising numbers of extra-judicial killings in fake encounters and staged operations in IIOJK are part of the extremist anti-Muslim designs of the “Hindutva” inspired BJP-RSS combine in India. Ironically, Kashmiri youth has been a specific target of the 900,000 strong Indian military force which is stationed in the IIOJK to muzzle the voice of the besieged Kashmiris. Equally condemnable is the Indian Occupation forces’ criminal act of opening fire at two Kashmiris inside a mosque compound in Handwara, Kupwara district on 7 April 2022. It is deplorable that during the holy month of Ramadan, the Indian occupation forces have rather intensified their repression against innocent Kashmiris. The unrelenting killings of the Kashmiri youth and wilful attacks on Muslim worshippers including harassment and intrusive surveillance of those visiting the mosques are patent manifestations of the continuing blatant violations of the fundamental rights of the Kashmiris and the widely pervasive Islamophobia among the Indian Occupation forces in IIOJK. Through a Dossier unveiled last year, Pakistan has provided to the world, incontrovertible evidence of the systemic oppression, human rights violations and war crimes committed by the Indian occupation forces in the IIOJK. Islamabad Declaration adopted at the culmination of the 48th Council of Foreign Ministers (CFM) of the OIC unequivocally condemns massive violations of human rights and persecution of Muslims in Indian Illegally Occupied Jammu and Kashmir (IIOJK). Pakistan reiterates its call for the investigation of extra-judicial killings in IIOJK by the Commission of Inquiry as recommended by the Office of the United Nations High Commissioner for Human Rights (OHCHR) in its Kashmir Reports of 2018 and 2019. Pakistan also urges the international community to hold India responsible for its brazen suppression of the innocent Kashmiris and play its due role in ensuring a just and peaceful resolution of the Jammu and Kashmir dispute in accordance with the relevant UN Security Council resolutions and the wishes of the Kashmiri people.