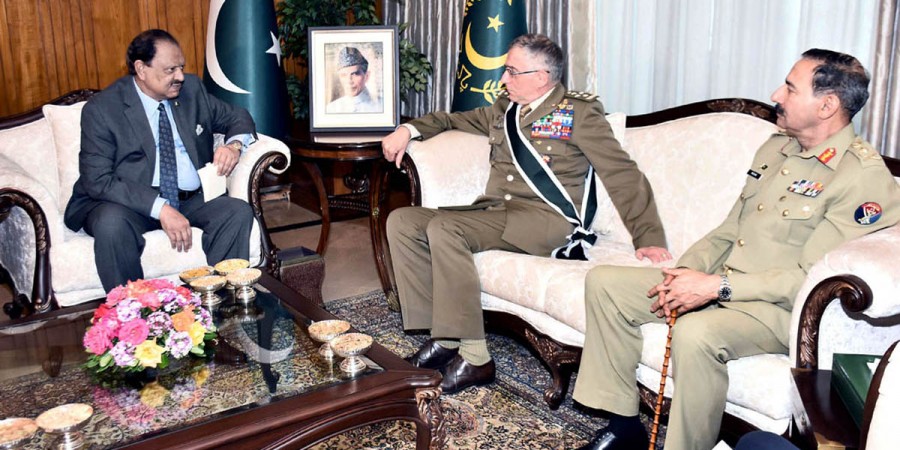 The President decorated General Claudio Graziano, Chief of Defence General Staff of Italian Armed Forces in recognition of his outstanding services and contributions in promoting friendly relations between the Armed forces of Pakistan and Italy.

Speaking on the occasion, General Claudio Graziano said that he is proud of being the recipient of such a prestigious award. He stated that the armed forces of both countries share the same values and commended the role of Pakistan Army in the fight against terrorism for peace and stability in the region.

“Even though we are geographically far, but we have excellent relations between our two armed forces,” remarked General Claudio Graziano. The Chief of Defence General Staff of Italian Armed Forces further said that cooperation between the militaries of the two countries will continue in the future as well.

Later, General Claudio Graziano called on President Mamnoon Hussain and discussed matters of mutual interest. The President congratulated the Chief of Defence General Staff of Italian Armed Forces on being conferred with Nishan-i-Imtiaz (M) and appreciated his services in strengthening relations between the two brotherly countries.

The President said that Pakistan is committed to eradicate extremism and terrorism through National Action Plan and Operation Zarb-e-Azb will continue till elimination of the last terrorist. President Mamnoon Hussain said that all countries in the world should join hands to combat terrorism as this menace has grown into a global problem.

The President said that Pakistan has been the worst victim of terrorism and has sacrificed more than 60,000 lives and suffered economic losses of more than $100 billion.

The President remarked that over the years there has been an increase in cooperation in the defence sector between Italy and Pakistan and now we have a strong foundation to further solidify this cooperation. President Mamnoon Hussain noted with appreciation that Italy has been offering training facilities to Pakistan armed forces personnel and hoped that this cooperation will continue in the future.

General Claudio Graziano, Chief of Defence General Staff of Italian Armed Forces thanked the President and the Government of Pakistan on being awarded with NI (M) and hoped that bilateral relations between the two countries would be taken to new heights in the future. General Claudio Graziano said that cooperation between Italy and Pakistan is of great importance to realise the common goal of peace and prosperity in the world. DNA